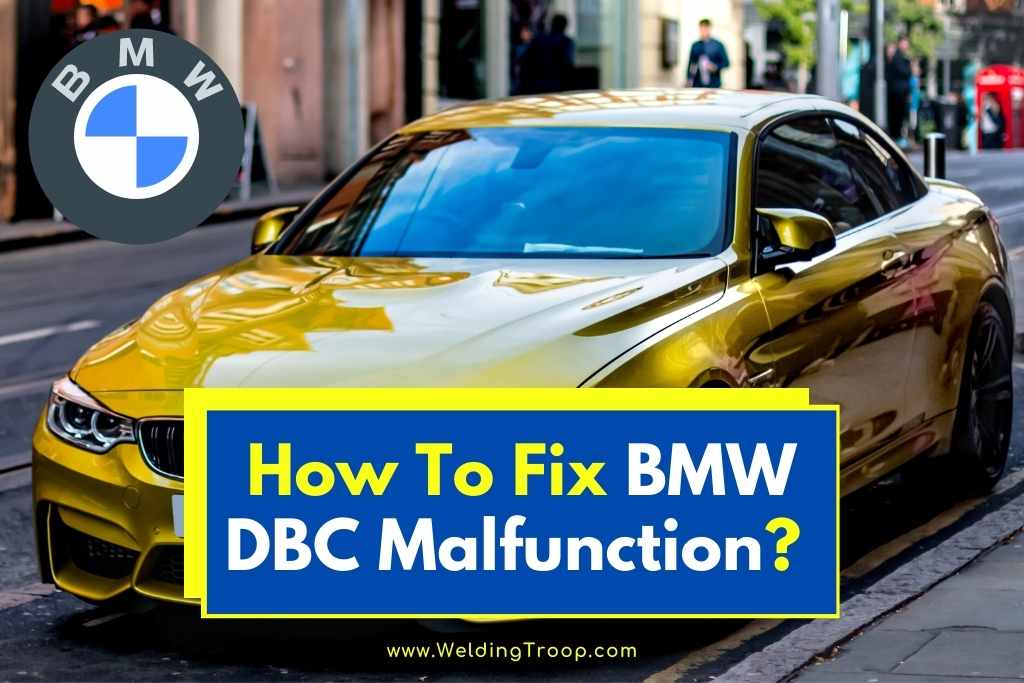 Many modern BMWs will have a DBC equipped. Many people are not aware that the DBC exists until they see a pop-up on their dashboard saying ‘DBC Malfunction’.

So, what causes this issue? How can you fix it? In fact, can you even fix it yourself?

Here is how to fix a BMW DBC malfunction which includes:

Step Nr.1: Use An OBD2 Scanner

Step Nr.6: Issues With The ABS

We are going to try and answer every single one of these questions on this page!

What Is The DBC In a BMW?

The dynamic braking control, or DBC for short, is a brake controller. While it serves a variety of purposes, its main job is to allow the driver to travel down a steep hill with a bit of ease.

The DBC reduces the need to have the brake constantly depressed.

It is no wonder so few people actually know that the DBC exists. There isn’t a whole lot of use for it, and unless you are traveling down steep hills frequently, it is probably never going to engage.

Of course, the fact that your DBC is not engaging frequently doesn’t mean that it is not going to throw up a few errors here and there. It can happen at any time, so you need to know how to deal with it.

How Do You Know You Have Issues With The DBC In a BMW?

Pretty much the only warning sign that you will have that the DBC is not working will be a warning light literally telling you that there is a malfunction in the system.

You may also notice that the start-off assistance if your BMW has it equipped, has stopped working.

Finally, if you travel down a steep hill, you may need to brake a lot more frequently. Although, this is something that you are only going to really be able to tell is an issue if you are constantly driving down hills.

Can You Fix DBC Issues Yourself?

These aren’t really issues that you can fix yourself.

If the issue with the DBC is due to low power levels in your vehicle then, yes, that is a problem that you can fix in the comfort of your own home.

Same with a few more issues, but these are going to need some technical expertise.

Is a DBC Malfunction In a BMW Bad?

A DBC failing isn’t normally a massive issue. It is an issue that will need to be dealt with eventually, but unless you are traveling down steep hills, it isn’t really going to be something that you notice is a problem.

What a failing DBC could indicate however may be more serious. For example, there could be problems with your ABS, or your battery power may be going.

Both of these are issues that could present a couple of problems later on, so it is best to get them rectified as soon as you possibly can.

How To Fix BMW DBC Malfunction

As we said, you won’t be able to fix every DBC issue yourself. However, what we will do here is go through the various causes of DBC malfunction from easiest to fix to hardest to fix.

This means that we will show you a couple of issues that you can rectify yourself, as well as some problems that are probably going to need a trip to the garage since there is no way that you will be able to fix them without a bit of experience under your belt.

Perhaps the quickest way to get to the bottom of the issues with your DBC is to use an OBD2 scanner.

This will scan your vehicle’s error log for error codes. You can then pull out the error code and work out exactly what the issue is. It makes it a lot easier to rectify.

If you head to a garage, they will always use an OBD2 scanner to diagnose the issue. This is why, sometimes, it is worth heading to a garage rather than dealing with the problem with yourself.

Of course, an OBD2 scanner will cost a bit of money. They are still useful to have around, though. They are not vehicle specific, and if you enjoy carrying out your own vehicle diagnostics, it will help a lot more beyond that DBC error.

It will diagnose any error once that check engine light comes on.

Let’s assume that you don’t have an OBD2 scanner and you want to do some diagnostics yourself.

Your first job is to check the battery.

A dying battery is one of the leading causes of a DBC malfunction.

This is because the DBC is not the most important thing in a vehicle. When a vehicle battery starts to die, it cuts off power from the less necessary features first. This often means the DBC.

Replacement of the battery or a battery charge is going to be the best way to deal with this issue. You can test the battery voltage with a multimeter, but your vehicle will also likely tell you when the battery is dying too.

BMW vehicles tend to be great for flashing up those warnings.

If the issue isn’t the battery, then it may be a problem with the alternator. This is a component that regulates voltage in your vehicle.

If the alternator dies, then there may be less voltage delivered, which can cause the DBC to stop working.

You just need some simple tools here. Nothing more than a couple of wrenches. You just unscrew the old alternator and flick the new one into place. Simple!

This is where we recommend that you start to consult with a garage. Not because a steering wheel angle sensor is difficult to replace, it isn’t. It is just expensive.

The steering wheel angle sensor detects the alignment of your steering wheel. If it is slightly off, then your DBC will just not work.

The same applies when it comes to wheel speed sensors.

Obviously, the DBC works by checking the speed at which your wheels are going. It will then trigger the brakes if you are going too fast downhill.

If the sensors on the wheels are broken, then the DBC cannot work. It may even flash up a malfunction warning.

Your wheel speed sensors control a lot of things in your vehicle so, if this is the problem, make sure that you get them professionally replaced as soon as you can.

6. Issues With The ABS

Finally, the issue may not be with the DBC, but with the ABS instead.

Again, this is not a problem that you are going to be able to resolve yourself. In most cases, it will be down to an issue with the hydraulics in the ABS system. If the ABS is broken, the DBC won’t work.

You will need to head to a garage so that they can check the hydraulics.

It may be dangerous to drive with a broken ABS.

When To Head To a Garage

Honestly, for anything other than the replacement of a battery, we would head to the garage.

Yes, there are ways that you can fix a BMW DBC malfunction at home. However, beyond replacing the battery, it is just a guessing game, and you may be tinkering about with components that you have no idea about.

At least if you go to a garage, they are going to be able to diagnose the problem nicely and quickly for you. It is also much less likely that you will be ending up spending cash on something that you do not need to replace.

Remember, there isn’t a real pressing need to get your DBC fixed. The only time that you should probably get the problem looked at right away is if the ABS is an issue.

A BMW DBC may not be the most essential feature, but if you are driving regularly, then it is one that you are going to come to love. it will ensure that you are not forever pressing the brakes when traveling down a steep hill.

Sadly, outside of a battery replacement, most DBC issues can’t be solved at home. Therefore, it is important that you take your vehicle to a professional.

They can diagnose and fix the issue for you.

link to BMW TPM Malfunction: Here Is How To Fix (Step by Step Guide)

Do you know how to fix BMW TPM malfunction? Well, you are at the perfect place to find the answer to such a question. Has your BMW started to flash a 'TPM Malfunction' warning? Well, as the...

Continue Reading
link to How to Clean a Clogged Fuel Pump (Step by Step Explained!)

Every gas-powered or diesel engine has a fuel pump, whether it is a car, marine, motorhome, or power generator. Just like any other mechanical device, it can get broken. One of the most common...