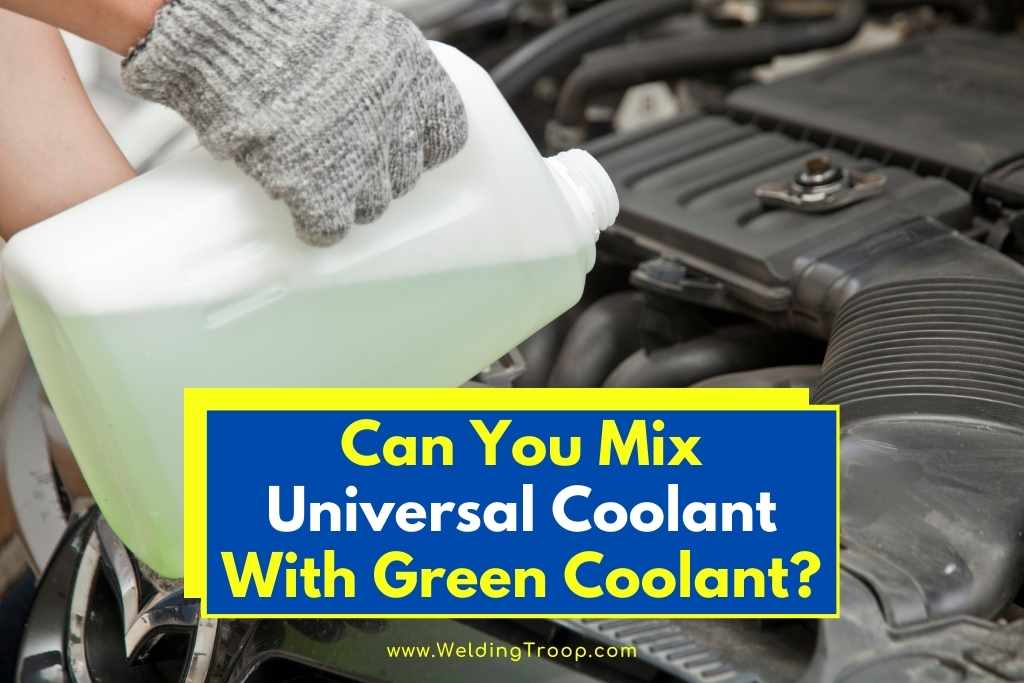 Do you know if you can mix universal coolant with green coolant? Well, you are at the perfect place to find the answer to such a question.

Having your liquid-cooled engine working properly depends a lot on having it properly cooled, whether it is in your car, boat, or power generator.

So, let’s get into details of this by first explaining what the green and universal coolants are, and why you should care about them.

What Is The Green Coolant?

The green coolant is the original North American universal coolant, it was engineered to be used in any vehicle, hence the moniker “universal”.

Before it, you would have to separately buy the antifreeze concentrates, distilled water, and corrosion inhibitors, and mix them yourself per the engine maker’s instructions.

The corrosion additives in the green coolant are specially formulated for engines that have many different parts made of several different metals.

Because of this, it is very often the best choice for vehicles that are made before 2000, and very often these engines do not benefit much from the newer coolants.

The only benefit that can be found is that the newer coolants have a longer life, as their corrosion inhibitors are longer lasting.

What Is The Universal Coolant?

Universal coolant is practically just a marketing term invented by the antifreeze makers to describe their products as appropriate for any engine.

And this is a true fact, universal coolants you can use in almost any engine, except in some specialized ones which anyway must use all custom fluids. For example, IndyCar engines.

But, as many different antifreeze manufacturers there are, there are different “universal” coolants. There isn’t any single universal antifreeze, they are all different products with widely different chemistries and longevities.

While they all perform the same function, keeping your engine cooled, additives are different in them.

And because of the different additive formulations, all of them are actually different coolants.

Can You Mix Universal Coolant With Green Coolant?

As I’ve said above, you can’t or shouldn’t mix them. If by “universal coolant” you mean the green one, it can be mixed with itself. But, you shouldn’t mix existing coolant in your engine with new one too often.

Coolants have corrosion inhibitors mixed in them. And these chemicals over time disappear from the coolant.

It’s their job to do so, as they are inhibiting corrosion, they are slowly perishing. So, when your coolant level drops because of evaporation, if you add some new coolant, you don’t extend its life by much.

So, you shouldn’t just keep topping it off. At regular intervals, you must flush all coolant from the engine and replace it with new.

The green coolant shouldn’t be mixed with other “universal” coolants. They have different chemistries and use different corrosion inhibitors.

You may presume that any old inhibitor is good and that they can be mixed with each other, but it’s not the case.

Different inhibitors can react with each other, thus losing the ability to inhibit corrosion, but also can cause some serious problems.

What Types Of Coolants Exist?

There are many different “colors” of coolants, green, blue, orange, pink, yellow, dark green, and some less often used colors.

But the coolants of the same color coming from different manufacturers are not the same thing. They might have the same or similar color, but their chemistry can be extremely different.

So, at the end of the day, you have a very large number of different coolants, as many, if not more, as there are coolant manufacturers.

But, all of these coolants can be split into two groups:

The most important characteristic of these is that they are relatively fast-reacting inhibitors, which means that they have a shorter life than OAT coolants, around 30,000 miles.

OAT coolants are the improvement of the green coolant. They have a different mixture of corrosion additives, always based on some or other organic acid. Hence the name.

These additives react much slower than those in the green coolant. Making them better for newer engines.

Hybrid Organic Acid Technology uses a mixture of some additives from IAT and some from OAT coolants. Because of this, the coolant has a much longer life, on average 5 years or 150,000 miles.

Why Coolants Have Corrosion Inhibiting Additives?

Because they are needed to inhibit the corrosion of the engine and radiator. In engines, the block of it is usually made of cast iron, though more and more are made of cast aluminum.

While the radiators are usually made of aluminum fins and very often copper pipes inside of them. And this mixing of metals is problematic.

When you have a closed liquid cooling system, in which some liquid is coming in contact with different metals, galvanic corrosion will happen, and the metal parts will eventually rot away. To prevent this, corrosion inhibitors must be used in the coolant. But, these additives have a lifespan, so the coolant must be regularly changed.

Can You Mix Different Color Coolants?

No, you can’t mix them, and you must always use the same coolant from the same manufacturer to top off your engine.

Different coolants have different chemistries of the additives in them. Because of this, you can have huge problems if you use for example half of the needed coolant orange and half pink.

Very quickly your coolant will turn into sludge if you mix different types of coolants.

But also, as the additives react with each other, both coolants you use greatly lose the ability to protect from corrosion.

So, your engine will be both not cooled, as the water pump will not be able to circulate coolant, and not protected from corrosion.

Because almost all coolants on the market are dubbed as “universal” many people do not know if they can mix the universal coolant with green coolant.

The reality is that you can’t mix them. They have different additive chemistries and mixing them can cause problems.

You can’t mix the universal coolants from different manufacturers either, as they also have different mixtures.