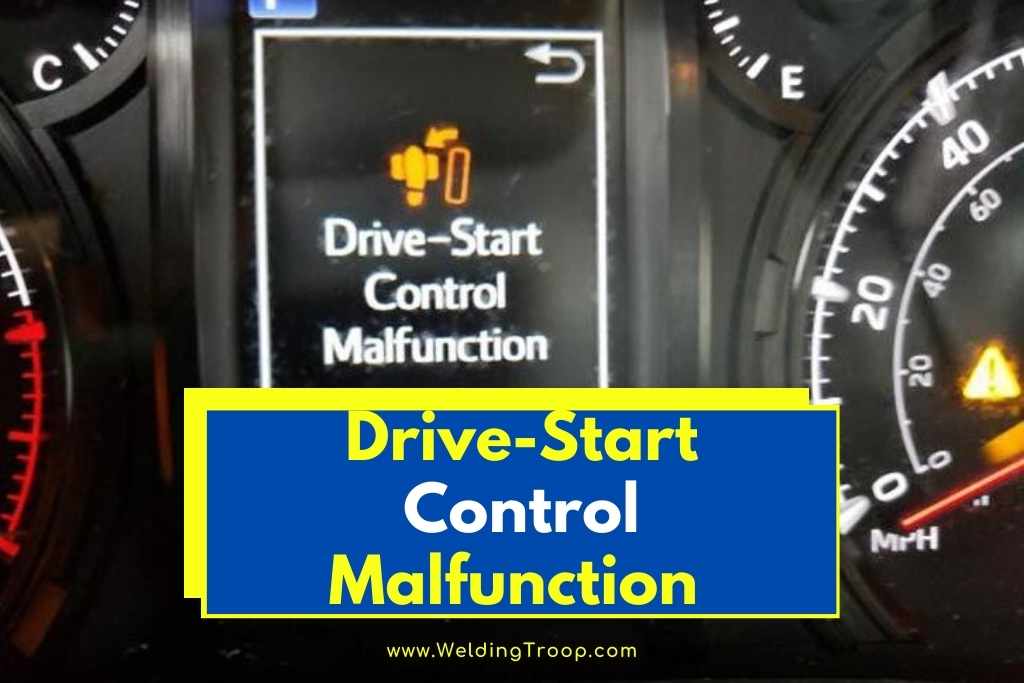 Do you know how to fix the drive start control malfunction? Well, you are at the perfect place to find the answer to such a question.

As you can probably guess, it is not uncommon for drive-start control malfunctions to happen in a Toyota vehicle. So, why does this happen?

Is it a problem that you are going to be able to easily fix? We are going to cover everything that you need, as well as a whole lot more, right here on this page.

What Is The Drive-Start Control?

Drive-start control is a feature that only appears in modern Toyota vehicles. In the past, Toyota has had a variety of complaints from people that said that their vehicle was dealing with sudden acceleration issues.

Toyota’s answer was to develop a variety of systems that could reduce acceleration problems. One of these solutions was a drive-start control.

The drive-start control feature helps to prevent vehicles from being started when they are switched to the wrong gear. It is a great system because it can stop sudden acceleration issues.

However, as you can probably guess, the more features that get added to a vehicle, the more chance there is of something going wrong, and it isn’t uncommon for people to have a drive-start control malfunction.

Read also >> Brake Override Malfunction: Here Is How To Solve (Step by Step)

How Do You Know When You Have a Drive-Start Control Malfunction?

It is pretty easy to know. Your vehicle isn’t going to start.

At the same time, the vehicle is going to flash up a warning saying that your drive-start control system isn’t working. This will appear on the dashboard.

Remember, only modern Toyota vehicles will have the drive-start control system in place. So, if your vehicle doesn’t have that and it still fails to start, then there is an issue elsewhere in the system that needs to be fixed. We can’t help you with that.

Can You Drive a Vehicle Without Drive-Start Control?

You may be able to drive your vehicle a little bit. However, if your drive-start control has properly malfunctioned, then you need to get to a garage as soon as possible, or at least attempt to fix the problem.

If you do not fix it quickly, then eventually you are going to struggle with starting that vehicle.

Can You Fix a Drive-Start Control Malfunction Yourself?

In other cases, there may be power supply issues, both of which can easily be rectified without too many issues.

Sometimes, there are wiring issues, software issues, or sensor issues that need to be completely changed out. The only way that you are going to be getting those problems fixed is if you head to your local Toyota dealership.

Honestly, most issues with the drive-start control are not going to be malfunctioning in the slightest. Instead, it is going to be down to your driving.

In other cases, if you keep your foot on the accelerator while you are changing gears, there is also a pretty good chance that the vehicle will end up giving you a drive-start control malfunction.

So, before you start diving into the various ‘fixes’, try to consider how you are driving first. Think about how and when you are switching gears.

If your driving doesn’t appear to be the issue, then you are going to need to start diving into the electrics of the vehicle.

Obviously, since the drive-start control is an electrical system, any issues with the electrics can have an impact on the way that the system works.

One of the most common issues here is a failing battery or a battery that has become slightly discharged.

This means that one of the first things that you should check is your vehicle’s battery. You can use a multimeter for this. If the battery doesn’t appear to be pumping out the right amount of power, then you should charge the battery. If that still doesn’t help, then you will probably need to replace the battery.

Here, you are going to need to pull out your vehicle’s manual. There should be wiring diagrams in there.

Look for any fuses that could potentially be connected to the drive-start system. Check to see if the fuses have blown. If they have, then replace them.

Since this can be quite a convoluted job and will require some serious messing about with the electrical systems, we do recommend that you get a garage to do this.

Toyota is notorious for having poor wiring diagrams, and they can be difficult to read, even for experienced electricians.

Of course, if you are replacing the fuse yourself, then it shouldn’t be too difficult to do. It will be a standard automotive fuse, and you should be able to pick these up at all automotive supply stores.

In very rare cases, a dirty ABS connector could be behind your woes. The ABS connector is located by the engine, and you will need to pull out your vehicle’s manual to locate exactly where it is.

The ABS connector has a variety of different jobs. However, the function that we are concerned with here is the way that the ABS connector works when it comes to pedal pressure and gears.

The ABS connector is linked up to a variety of different sensors, and it will be able to detect the pressure that the pedals are pushed at, as well as the gear that your vehicle is in.

As you can probably guess, if there is a bit of a mismatch between the information that the ABS connector is receiving, it could trigger a drive-start malfunction.

In most cases, pulling out the ABS connector and giving it a clean should be more than enough to rectify these issues. However, there is also a small chance that the ABS connector has completely rusted. In this case, you don’t really have much choice but to replace it.

This is a job that you are easily going to be able to do yourself. If you know how to take an ABS connector out, then you certainly know how to replace that ABS connector again. You must purchase a like-for-like replacement from Toyota.

You won’t be able to put any old connector in your system.

When To Visit a Garage

If you still can’t fix the drive-start control malfunction, then there isn’t much else that you are going to be able to do on your end.

This is because the issue is likely to be wiring or another electrical fault. In some cases, it could be down to a software bug.

Rather than head to a standard garage, we suggest that you head to a Toyota dealership with a garage.

Because the drive-start control system is fairly niche, it is probably going to be best in the hands of an experienced Toyota dealership that knows how to deal with the problem. Your typical garage won’t.

There have been some people that have reported that the entire drive-start control system needs to be replaced. That can be a very expensive job if your vehicle isn’t currently under warranty.

The drive-start control system is a system that can only be found in modern Toyota vehicles. It is an incredibly important feature. It makes vehicles much safer to drive (no sudden acceleration). However, it does have one flaw.

If the system is malfunctioning, you can’t start your vehicle properly. This means that if you have a malfunction, it is best to get it dealt with sooner rather than later.

If you want that drive-start control system fixed, then your best bet is to head to a Toyota dealership. However, you will be able to carry out some repairs at home e.g. replacing a battery, or changing out the fuses. In some cases, changing the way that you drive may also help.

link to Brake Override Malfunction: Here Is How To Solve (Step by Step)

The brake override can be an absolute lifesaver. In fact, we have no doubt that it has saved countless lives before. However, as with most systems in your vehicle, it is also prone to breaking...

Do you know how to fix a Toyota charging system malfunction? Well, you are at the perfect place to find the answer to such a question. One of the most common issues with Toyota vehicles is the...