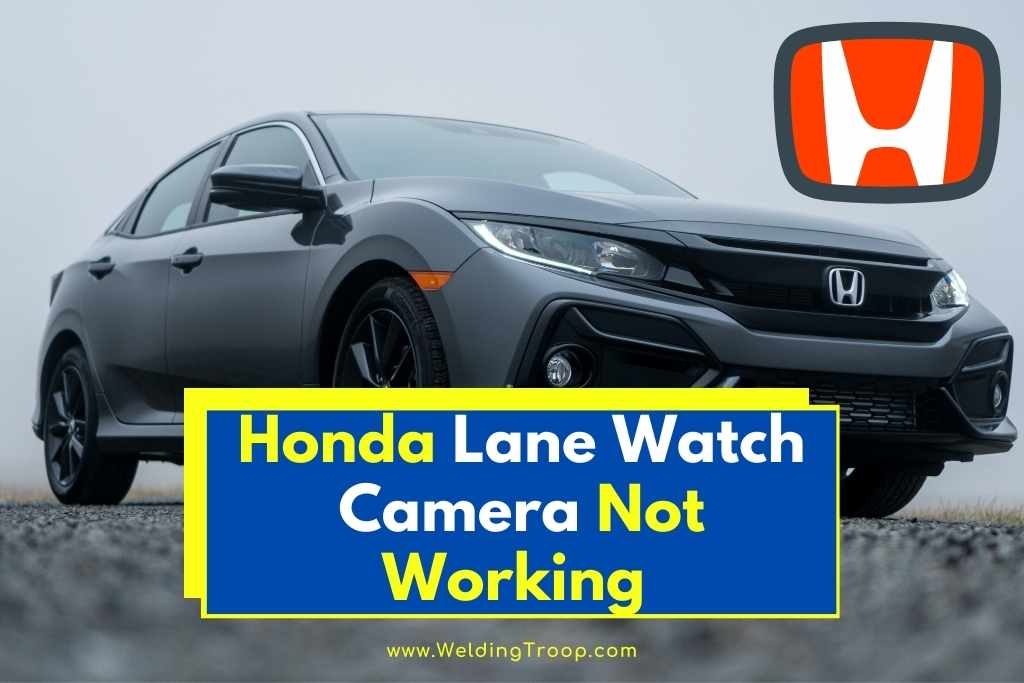 Honda Lane Watch is an incredibly useful feature. The camera sits around the wing mirror on the passenger side of the vehicle.

The image will then be beamed into the inside of the vehicle. This makes it easier for the driver to know when to change lanes.

Of course, like most tech, it isn’t uncommon for Honda Lane Watch to stop working every so often. This can be incredibly annoying if you have come to rely on the system.

Thankfully, most issues related to the system shouldn’t be too tricky to fix. Let’s tell you how to deal with them.

Obviously, the big sign that your Honda Lane Watch isn’t working is the fact that you have absolutely nothing on the screen. Although, this issue is actually rarer than you may think. A Honda Lane Watch just dying doesn’t happen.

There will be a ton of warning signs beforehand, and normally if it does just die, it is because you have got into an accident. At that point, you will already know what the problem is.

In most cases, you will notice random disconnects with the Honda Lane Watch e.g. it doesn’t always engage when you hit the right turn signal on your vehicle.

Sometimes, the image may be a bit sporadic and cut off a little bit, even when the turn signal is switched to the right turn.

In other cases, there will be a bit of blurriness or dirtiness on the Honda Lane Watch. Thankfully, this is one of the easier problems to fix.

How Important Is Honda Lane Watch?

Well, the Honda Lane Watch is convenient to have. It makes it easier to make those right turns since you aren’t going to have to peer into the passenger side wing mirror quite so much.

However, it isn’t necessary. You are a driver. You are perfectly capable of looking into the wing mirror if your Honda Lane Watch fails.

Of course, it is a great feature in your vehicle, so if does break, then you will probably want to get it fixed as soon as possible.

Luckily, it is not too difficult to do (in most cases).

Can You Fix Honda Lane Watch Yourself?

It depends on the issue.

If the image is blurry or dirty, then it is a problem that should be pretty easy to fix yourself.

The same if the camera seems to not be activating properly, or perhaps cuts out every so often.

Still, at the end of the day, the Honda Lane Watch is essentially a camera and a monitor. This is not going to be your typical vehicle maintenance.

Both of those items can be pretty complicated to deal with, which means that while we are going to help you to fix the vast majority of the problems with your Honda Lane Watch, we are not going to be able to help you with everything.

Some of the time, it is just broken and there is nothing that you can do other than get the whole system replaced.

If the camera looks blurry or dirty, then this problem is going to be easy to fix.

While the Honda Lane Watch has a lens that is pretty well protected, dirt and dust can get kicked up onto it while you are driving.

When this happens, the lens can get a little bit dirty, and you may find it difficult to see anything through the monitor.

The only way to deal with this issue is to get yourself a lint-free cloth (typically used for cleaning camera equipment) and wipe the lens of the Honda Lane Watch down.

It is located just under the wing mirror on the passenger side, so it shouldn’t really be too difficult to find.

This is probably the most common issue with Honda Lane Watch cameras, so you will probably be done by this point. Of course, if the camera isn’t dirty, then move on.

Camera Not Activating On Right Turn

The Honda Lane Watch is supposed to activate on the right turn.

If it isn’t, then you can check whether the camera is working by using the following process:

If you can get the camera working like this, then there is a good chance that there is a problem with the right turn signal.

You may have to head to a Honda dealership to get this problem rectified. It means that the wiring may be slightly off in your vehicle. Most of the time, it is going to be a pretty quick repair job.

You may also want to check those settings to ensure that the camera is actually turned on. If it isn’t, then activate it.

Is The Camera Still Not Activating?

If the camera still doesn’t seem to be working, then you may have a few issues. This is because there isn’t really a whole lot that you can do.

As we mentioned before, you can double-check to ensure that the camera is actually activated. Some people find that deactivating and then reactivating the camera again will help.

There is a very small chance that there is a small software bug that will clear itself when you do that.

If that doesn’t work, then you have just a couple more solutions that you can try.

Turn The Screen Off and Back On Again

On the screen where the Honda Lane Watch normally appears, there will be a button to turn the system on and off. Press and hold this button down for about 5-10 seconds.

A lot of people have noted that once their system reboots, the Honda Lane Watch works again. Once again, this is likely going to be down to a software bug, and resetting the system will clear the cache for you.

If the screen doesn’t turn on, then you are going to need to check the fuses for the system. Although, this is easier said than done.

The wiring will vary based upon the model of Honda that you have. Honda is notorious for having poor wiring diagrams too.

We suggest that you look up a video for your particular model of Honda online. This will give you a bit of information about where the fuse is located.

In some cases, replacing the fuse for the Honda Lane Watch should fix the problem.

There could also potentially be an issue with the wiring on your Honda. Again, Honda wiring diagrams are pretty tough to read.

We recommend that you reach out to Honda rather than attempt to rewire the Lane Watch.

In exceedingly rare cases, there is a chance that your vehicle’s battery is failing. Before you head to Honda, we recommend that you double-check that your battery is outputting the right voltage.

If the voltage is too low, then the vehicle will not turn the Honda Lane Watch on.

Honda Civic lane watch camera doesn’t work – how to fix problem >> Check out the video below:

When You Need To Reach Out To Honda

This means that you are not going to be able to take your Honda Lane Watch to a mechanic. Instead, you are going to need to take it to a Honda dealership.

If your vehicle is still within the warranty period, and it is evident that the Honda Lane Watch hasn’t been damaged in an accident, then chances are that the Honda dealership will be able to fix the problem for free, or perhaps not a lot of money.

If the vehicle is out of warranty, then the Honda dealership will be able to replace the Honda Lane Watch at a small cost.

Still, it is better than not having a Honda Lane Watch, right?

The Honda Lane Watch is an awesome device, but it is prone to a few problems. An even bigger issue is the fact that many of these issues can be tough to rectify yourself.

This is because the issue will likely be a problem with a camera or a screen, both of which go beyond the capabilities of any car repair company.

In most cases, however, all your camera needs are the replacement of the fuse or a quick clean. Anything more intense than that, and you will probably need to take your vehicle to a Honda dealership.