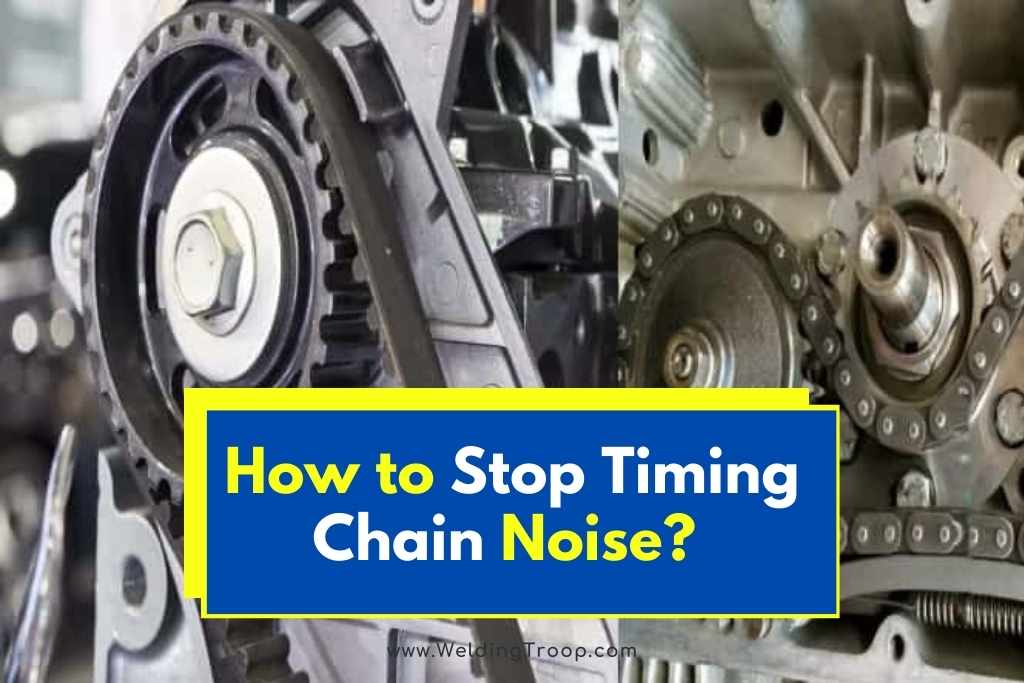 Many things contribute to the efficiency of an engine, and timing is one of the most important. An engine that isn’t functioning with proper timing may work, but it certainly isn’t going to do it well.

Whether it’s a timing belt or a chain, engines have a device that ensures the camshaft and crankshaft work in unison.

But unfortunately, that timing chain can make some awfully annoying noises when there’s something wrong with it. So, if your timing chain is making strange noises, what can you do to stop it?

Why Do Timing Chains Rattle? (Diagnose)

Before you can even worry about stopping whatever noises your timing chain is making, you have to understand what might be causing that noise. To start, we should establish what components most timing chains have.

The system usually includes the chain itself, some sprockets that hold the chain, a tensioner, a water pump, and some ball bearings to help the chain move in the right direction.

As you can see, there are several components here, meaning there could be multiple reasons for that darn rattling.

That said, it’s usually the chain itself that is the root of the problem. The biggest problem is that the timing chain will stretch over time, which loosens its fit and allows it to bump against multiple parts of the setup.

It can rattle due to being loose because it’s bumping against surrounding plastic or other parts of the engine.

Normally, the tensioner would prevent a loose timing chain from being an issue. So, if a loose chain is bouncing all over the place and causing rattling noise, it’s probably the tensioner that is actually compromised.

The rattling isn’t the worst of your problems either. If the timing chain gets really loose, it could fly off of the sprockets during operation and get stuck elsewhere in the engine.

Needless to say, that is very bad and could wreck your engine big time. So, it’s best to fix a loose timing chain as soon as you notice it if you can.

Read also >> Do Timing Chains Need To Be Replaced? (Here Is Why)

How Can You Fix a Rattling Timing Chain?

OK, so here’s the bad news: this isn’t one of those problems that have a nifty DIY fix that will solve your problem.

The reality is, unless you yourself are very well-versed in car engines and fixing them, you will probably need a mechanic no matter what.

That’s because the only real way to stop the timing chain rattling is to replace the part that is causing it to happen. In some cases, multiple parts, or even the entire system, may have to be replaced. It really depends on what the issue is.

What you can do before taking the car to a mechanic is trying to determine which part exactly is causing the rattling.

Naturally, this is something you should only do if you actually know a thing or two about car engines. If not, it’s best to leave this part to a mechanic as well.

The tensioner should be checked first, as its inability to keep the chain tight is usually a source of the rattling.

If the tensioner is defective, it’s much cheaper to replace that alone than it is to replace the entire kit. You should check the bearings and sprockets for the exact same reason, and of course, the chain itself.

However, there are some parts of the setup that could be the cause of the rattling that may not be immediately obvious.

For instance, the plastic shoes that direct the chain can break down or loosen over time, and the rattling could be caused by them, not the chain. Those are super cheap to replace if that is the case.

Another possibility is the water pump. If it’s defective, a loose shaft that is vibrating when the engine is running could be what is causing the rattling noise.

Like the plastic shoes, the problem may not be the chain at all, but this part, which is much cheaper to replace if that’s what you have to do.

Unfortunately, finding the defective part and replacing it is about all you can do to stop the rattling you may be hearing.

If you have the right know-how and tools, you can do all of that yourself, but most people are going to have to rely on a mechanic for this.

The good news is that locating a singular part of the kit that is broken can save you some money, since replacing one part is cheaper than replacing everything.

On the other hand, with the exception of freak accidents, if one part of the kit is worn and failing, it’s likely that the other parts aren’t far behind.

Here Is How To Fix A Timing Chain Rattle Noise >> Check out the video below:

Does a Rattling Timing Chain Need to be Fixed Right Away?

Ideally, yes. The problem is that your rattling noise could be no big deal, or it could be an indication that you’ll break down and ruin your engine if you drive too much more with it. But there’s no way to tell which is the case easily.

For instance, if the chain is stretched just a little bit, then you could probably get away with driving with it for some time.

But if the rattling was caused by a defective tensioner, the odds of the chain outright breaking or jumping off the sprockets is quite high, and that could be catastrophic.

If that happened, not only will your engine be damaged, but you could end up in a serious accident. Unfortunately, there’s no way to know whether the problem is light or severe unless you take the engine apart and investigate, and many people aren’t properly equipped to do that.

All of that being said, it’s always safer to treat a rattling timing chain as a serious problem that needs to be addressed immediately.

We recommend taking it to a mechanic for inspection as soon as the noise is detected, especially if it’s a consistent thing you hear whenever you drive.

In fact, the ideal thing to do if the noise starts up while you’re driving would be to stop the car and call a tow truck.

But if a shop or garage is nearby, you could drive there slowly if you had to. It may seem like overkill, but it’s best to play things safe in a situation such as this.

A rattling timing chain is usually caused by some part of the timing chain kit being defective, such as the tensioner, water pump, or sprockets.

Unfortunately, there’s no cheap and easy DIY fix for this. If the part is defective, it needs to be replaced, and that means bringing your car to a mechanic unless you are capable of engine repairs yourself.

Just make sure you attempt to identify the exact part that is causing the problem first. It is much cheaper to replace just one part instead of every part, so make sure everything actually needs replacement before doing that.

link to Timing Belt vs Timing Chain (What´s The Difference)

Do you know what the difference between timing chains vs. timing belts is? Well, you are at the perfect place to find the answer to such a question. Depending on your vehicle, you will have a...

Continue Reading
link to What Causes the Timing Chain to Break? (Symptoms + Costs)

If your timing chain breaks, it's considered a critical failure—which means you’re out of luck, sitting on the side of the highway and waiting on a tow truck or a family member to come to pick...