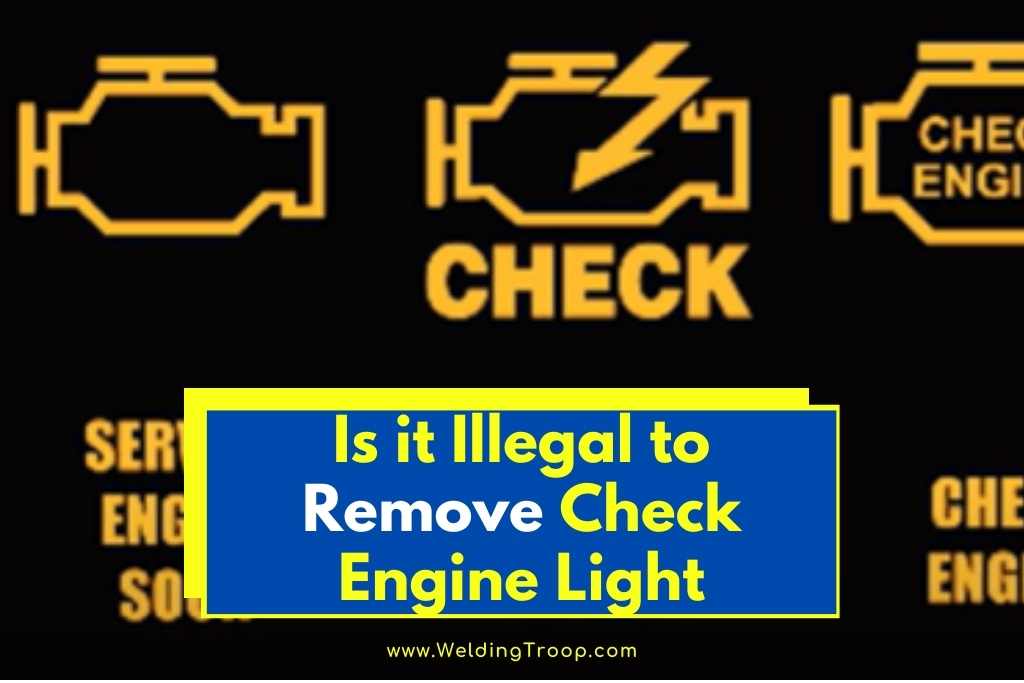 Do you know if it is illegal to remove or reset check engine light? Well, you are at the perfect place to find the answer to such a question.

The check engine light is your vehicle’s way of informing you that there is something wrong. Just because it’s a “check engine” doesn’t mean it’s only the engine either.

It can be just about anything. Check engine lights are important diagnostic tools and be wary when considering removing them.

The legality of removing or otherwise altering the check engine light may or may not be illegal, considering both the intended purpose and the state you’re living in. Some states have auto inspections with emissions standards and there might be a law violation if you remove it.

Removing or placing black tape over the light behind the panel will probably get you into trouble if you are doing it to sell the vehicle under false pretenses.

At the very least, it will leave the door wide open for someone to sue you to the moon and back.

Why is The Law Unclear?

Because you’re dealing with 50 states, many of which don’t have vehicle inspections once per year. Also, some states would rather these issues get dealt with in civil court. Most buyers have Lemon Laws on their side but that doesn’t necessarily focus on private sales between two individuals.

Also, it may not be illegal per se in some states that do have inspections because their inspectors have ways of discovering if you’ve disabled the check engine light.

Besides, an emissions inspection will cover whether or not your vehicle is failing emissions, whether there’s a check engine light on or not.

The best way to find out whether or not removing the check engine light is legal is to check your state’s laws.

There are several reasons people might want to pull the fuse on a check engine light that doesn’t have anything to do with deceptive practices.

For instance, say there is something wrong with a car owner’s gas cap. The car throws up that aggravating, bright check engine light on the dashboard and no matter what, the driver can’t get it to go away.

Pulling the fuse or covering the light with black tape might be the most effective way to eliminate it. So long as the driver is not selling the vehicle under false pretenses or trying to fool emissions inspectors, it’s that driver’s property to do with what they will.

This is normally what people resort to if the check engine light comes on for some mundane factor. Admittedly, the federal government’s push to have these lights in vehicles has come down to some pretty silly stuff.

Like the check engine light coming on every time your vehicle hits a bump. You laugh but hey, it happens. The computers that go into cars nowadays monitor everything almost down to the last molecule.

If something is even slightly amiss, even if there is nothing really wrong with the car, you’ll get a check engine light.

It can be aggravating but it can also be reset with a standard OBD-II diagnostic tool, which you can pick up for a relatively cheap price. You can also throw in for an advanced OBD-II and those can get quite expensive.

Either way, even your basic OBD-II will tell you the code the vehicle’s computer is throwing and you can then look the code up, along with your vehicle’s year, make, and model, to discover what’s wrong with it. They’re very convenient devices and everyone should have one in their car.

Even the cheap OBD-II models are capable of diagnosing and then resetting the check engine light. The other way to reset it is to pull the negative lead off the battery terminal and put it back on after about a minute.

The Drawback of Removing the Check Engine Light

Aside from the potential legal problems, it might cause (especially if you are selling your vehicle or bringing it in for an inspection), not having a check engine light can potentially be dangerous.

As much as you might hate the thing, it’s there to tell you something is wrong.

You might see several articles out there informing people that the check engine light cannot be removed from newer model cars.

Don’t believe that for a minute. People can hack high-end home security systems from a hundred yards away, a check engine light in newer vehicles is not invincible.

While the vast majority of the time, the check engine light may be non-essential, there are times when it is absolutely crucial to the operation of your vehicle.

The check engine light serves more than one purpose by showing up on your dash.

The first is a solid, yellow, or orange engine symbol (or simply the words, “check engine soon” or something similar). This indicates there is something going on that the computer detected.

In newer cars or well-maintained cars, it might be something as simple as the fuel and oxygen not being perfectly balanced for a millisecond.

Without the check engine light function, you’ll never suspect a thing. And, there is always the matter of a solid check engine light warning you of something wrong but, since you don’t know about it, it becomes a critical malfunction in due time.

For that reason alone, it’s highly inadvisable to ever find a way to remove your check engine light. You need to know what’s going on with your vehicle, even if you think it’s silly, distracting, or aggravating.

The legality of pulling a check engine light out is determined by where you live and what the laws are in your state.

If your state conducts annual emissions inspections, you may run into trouble there as well, especially since they have ways of checking that sort of thing.

You should never ignore or remove your check engine light, as it’s an important part of your vehicle’s communication system and you should always pay attention to it.

link to Can a Broken Spark Plug Damage Engine? (Here Is What To Do)

A spark plug is an incredibly cheap component. Tiny too. A lot of people wonder how important it is to the inner workings of their vehicles. Hint: it is very, very important. So, what happens if...

Continue Reading
link to Why Is My Eco Light not Working? (Here Is How To Solve!)

Do you know why my eco light is not working? Well, you are at the perfect place to find the answer to such a question. In this day and age, Eco light is more important than ever. It allows drivers...