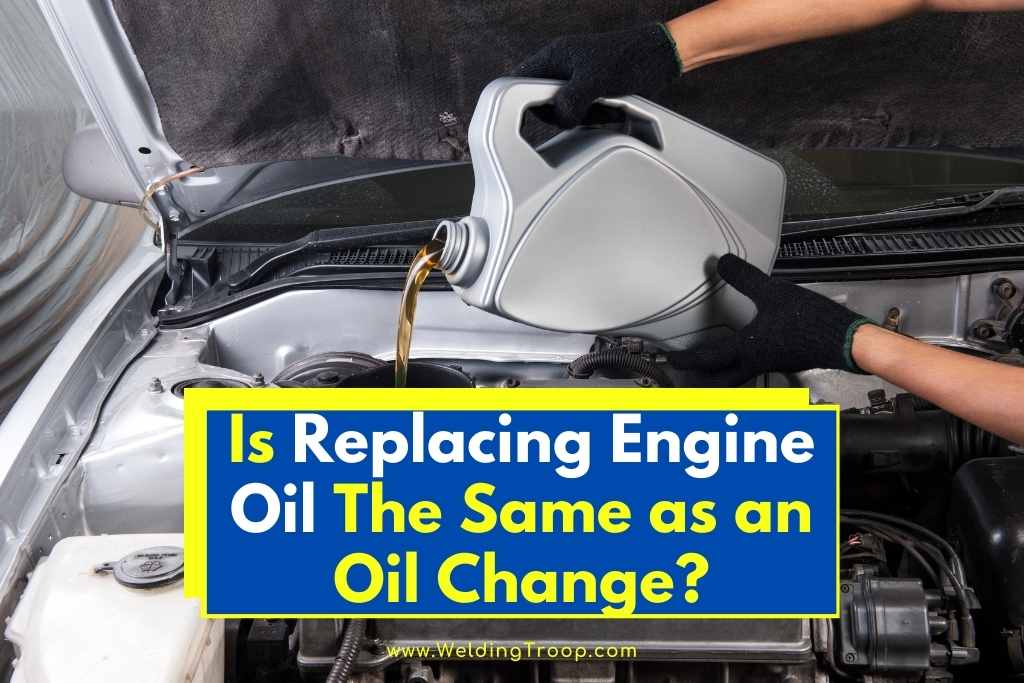 You may have heard the terms ‘replacing engine oil’ and ‘oil change’. You may be wondering whether they are the same thing.

That’s what we are going to discuss on this page. We are also going to give you a bit of information about oil changes, and when your vehicle may end up needing one.

We have a lot to cover here, so we are just going to jump right on in!

Is Replacing Engine Oil The Same As An Oil Change?

Yes. Replacing engine oil is exactly the same as an oil change. People just use the latter term because it is much easier to say!

The engine oil’s role is to help keep your engine properly lubricated. This ensures that everything inside of your vehicle runs smoothly, allowing you to drive it.

Over time, the level of engine oil in your vehicle starts to dwindle away. Various contaminants start to get into the engine oil too.

This means that, ultimately, the oil isn’t going to be lubricating the engine as well as it should. This could end up causing some serious issues with your engine, although we will talk more about that in a short while.

Is An Engine Oil Top-Off The Same As An Oil Change?

No. An engine oil top-off is not the same as an oil change, although, it does involve you adding new engine oil into your vehicle.

With a standard oil change, you are going to be draining all of the oil from the engine’s oil tank. You are then going to be adding completely fresh engine oil into the mix.

With an engine oil top-off, you are just pouring new engine oil on top of the old engine oil. This is something that is normally done when your oil levels have fallen below the required levels, but you don’t have the time to carry out a full oil change.

In almost all cases, you should try to avoid carrying out an engine oil top-off. At least, if you have time to carry out a full engine oil change.

What you have to remember is that the whole reason why we carry out engine oil changes is that the oil inside of your vehicle will have started to fill up with all sorts of contaminants.

It is going to be filthy. By topping up the engine oil rather than replacing it, you aren’t actually removing any of the contaminants. You are just diluting them.

This means that there are still going to be contaminants that are damaging your vehicle’s engine.

Don’t get us wrong. There are situations where an engine oil top-off can work e.g. you have a serious engine oil leak and you need to head to the garage, or you simply do not have time to replace the oil.

However, do remember that an engine oil top-off does not negate the need for you to replace the oil at a later date. You should ensure that you get that engine oil replaced as soon as possible.

How Often Do You Need To Replace Your Vehicle’s Engine Oil?

Most vehicles will require that you replace the engine oil when one of these conditions is met:

If you see the ‘check engine’ light come on, then this would also indicate that you need to replace the oil on your vehicle.

You may also need to replace the engine oil if you are driving in harsh conditions. For example, those that regularly take their vehicle off-road are more likely to require regular oil changes because of all the contaminants that could get into the engine oil from off-roading.

The same would apply if you are regularly driving in hot temperatures, particularly if you find yourself constantly stopping and starting.

Obviously, the more that you drive, the more likely you are to require an oil change.

This is just a guideline, though. You should also be checking the engine oil levels regularly. This way, you can work out how ‘dirty’ the engine oil is.

If the oil is any color that the same color it went in as (normally a clear brown color), then it probably needs to be replaced.

Honestly, as long as you replace your engine oil regularly, then you should be fine! Your vehicle will probably let you know when you need an oil change anyway, at least if you have a fairly modern vehicle.

What Happens If You Don’t Replace Your Engine Oil Regularly?

The job of the engine oil in your vehicle is to keep the engine lubricated. It will help to ensure that all of those parts keep moving perfectly.

If you do not replace the engine oil regularly, then the lower amount of lubrication can lead to various components in your engine breaking.

In other cases, it may cause the engine to overheat. In both cases, you could find that your vehicle suddenly stops working when you are driving. However, we must stress that you would not have to replace your engine oil for a long time for there to be massive issues such as an engine overheating.

Basically, if you are not replacing your engine oil regularly, then you will be dealing with a rather expensive repair bill.

There are plenty of people who have had to lose their engines because they didn’t change their oil when it should have been changed.

Remember, if your engine oil is filled with contaminants and other bits of dirt and grime, then this is going to end up clogging up the engine. If the problem gets too bad, then the engine may need to be cleaned.

This is an expensive job, and it is one that you will not be able to do yourself. After all, it is going to require that engine to be completely taken apart, components replaced, etc.

We are talking several hundred dollars for this job to be carried out.

Can You Replace Your Vehicle’s Engine Oil Yourself?

You can replace your vehicle’s engine oil yourself. It isn’t necessarily a difficult job either, even with some of the older vehicles.

Your vehicle’s manual will walk you through everything that you need to do to change the engine oil in your vehicle.

You should remember that if you are planning on replacing the vehicle’s engine oil yourself, you are going to need to purchase the right oil.

There are plenty of different options on the market. Your vehicle’s manual should tell you the exact engine oil blend that you need.

That being said, we do always recommend that you have an expert replace your vehicle’s engine oil anyway. Not that we don’t believe that you can do it yourself. It is more the fact that an engine oil replacement will often line up with when you should get your vehicle serviced.

This means that if you go to an expert, they will be able to carry out the full vehicle service for you. It will help to save you money in the long run.

After all, regular vehicle services can help to deal with smaller problems before they become much bigger.

How Long Does a Vehicle’s Engine Oil Replacement Take?

There will be slight variations based upon the vehicle that you have. Things may also take a little bit longer if you are taking your vehicle to a pro.

Generally speaking, you can expect a complete oil change to take around 40-minutes. This means the process of checking the oil levels, draining away the old oil, and putting the new oil into your vehicle. In the grand scheme of things, it is a pretty fast process.

Do make sure that you have everything that you need when you change your vehicle’s oil. This includes something that will allow you to ‘catch’ the old oil that you are draining out.

You don’t really want to be putting a ton of old engine oil on the floor. It is a fire hazard.

Replacing your engine oil is the same as an oil change. The terms can be used interchangeably.

You should be replacing your engine oil at least once every 6-months, although if you regularly find yourself on the road for longer trips, or you are spending a lot of time driving off-road, then you may need to replace it far more frequently than that.

You can replace the engine oil yourself, or you can head to a garage for them to do the job for you.