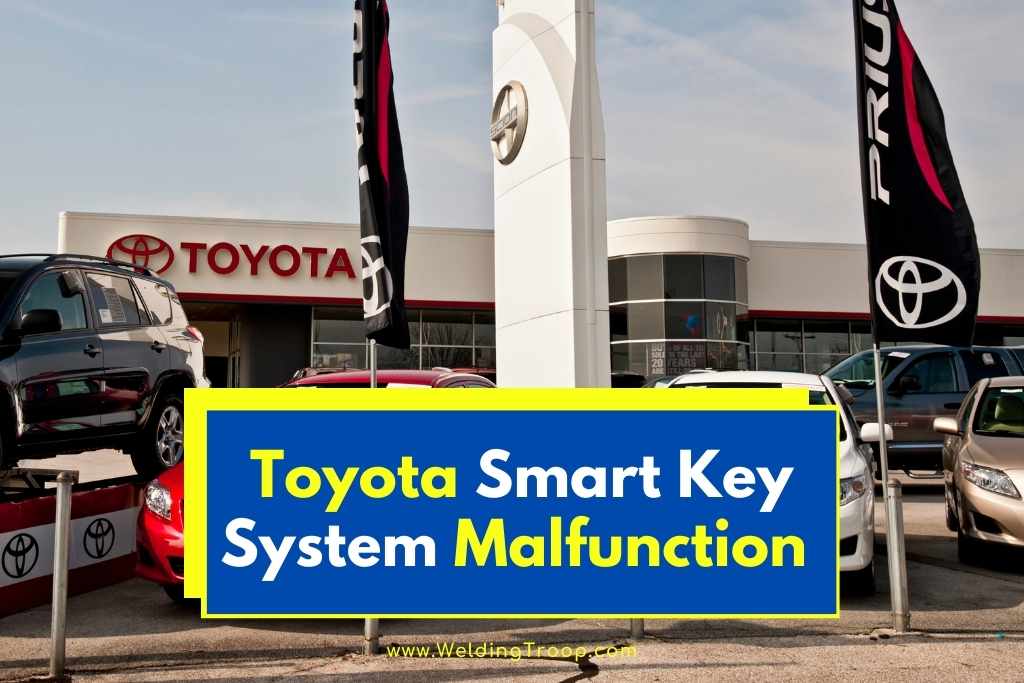 A lot of people love the Toyota Smart Key system. It shouldn’t really come as any surprise, really. The key makes it ridiculously easy to start your vehicle.

It doesn’t even need to leave your pocket. However, somewhat frustratingly, the Toyota Smart Key system doesn’t always work.

In fact, it is a common problem with Toyota vehicles. So, how do you fix it? Is it even a problem that you can fix yourself?

On this page, we are going to tell you as much as we possibly can about getting your Toyota Smart Key fixed. We will also tell you some of the most common causes of any issues you face.

What Is The Toyota Smart Key?

The Toyota Smart Key is a nifty little device that ensures that your vehicle only starts when the Smart Key is nearby.

If the Smart Key isn’t nearby, then the vehicle won’t start.

One of the cool things about the Toyota Smart Key is that you can keep it in your pocket at all times.

As long as you are reasonably close to the ignition system or your vehicle, then your vehicle will automatically lock/unlock. You can see why people love it.

What Does a Toyota Smart Key System Malfunction Look Like?

In some cases, your vehicle’s dashboard is going to flash up that there is a Smart Key Malfunction.

This normally happens if the vehicle is able to detect that the Toyota Smart Key is there but is not able to get enough of a read on it to start the vehicle.

Of course, for most people, the only time that they notice that their Toyota Smart Key is not working is simply down to the fact that their vehicle doesn’t start.

This means that their Toyota Smart Key used to start the vehicle, but now it magically doesn’t.

Do You Need To Fix a Toyota Smart Key Malfunction?

Honestly, if you have noticed the issue, then we recommend that you get the key dealt with as soon as possible. As you will see shortly, the vast majority of the problems shouldn’t be too tricky to fix yourself.

Obviously, you are going to need to use your backup key to start the vehicle, unlock and lock the doors, etc.

How you start the vehicle will be dependent on the model of Toyota that you have. However, in the vast majority of cases, you just need to hold the key fob of the spare key up to the engine system (by the wheel) and wait for the green light to come on.

It will take about 20-seconds. If that doesn’t work, then you probably have deeper issues with your vehicle than just a smart key malfunction.

Can You Fix a Toyota Smart Key Malfunction Yourself?

Most issues can be fixed with ease. As you will see shortly, the bulk of the problems that you will face will be related to batteries or general glitches with your system.

Armed with your Toyota manual, you should be able to fix most of those problems.

Of course, at the end of the day, modern Toyota vehicles are still complex beasts. This means that there may be an issue or several, that can be a little bit trickier to deal with.

This means that you will have no choice but to head to a Toyota dealership. However, we are going to give you advice that should, hopefully, prevent you from needing to do that.

Change The Battery On The Toyota Smart Key

Chances are that your Toyota Smart Key doesn’t work because the battery has died. They only last a couple of years, although this will be dependent on how often you use your vehicle.

You can easily replace the battery on the Toyota Smart Key yourself, and it shouldn’t be too tricky to pick up a replacement.

You do not have to purchase a replacement from Toyota, don’t worry. Most automotive stores will have replacement batteries in stock. However, honestly, you do not even need to go to one of those stores.

Lots of electronics stores will keep the same batteries, but they will probably be a whole lot cheaper.

Check The Battery In Your Vehicle

While this is unlikely, if you have been noticing other issues with your vehicle, then it may be worth checking the vehicle’s battery.

As with the Toyota Smart Key battery, the batteries in your vehicle won’t last forever. Sooner or later, you are going to need to swap them out.

There are multiple things that can cause issues for batteries in your vehicle e.g. a malfunction in the charging system, old batteries, etc.

Update The Software For Your Vehicle

While this is also rare, there are various software glitches that could cause the Toyota Smart Key system to fail.

Every so often, Toyota may release new software updates for your vehicle that may need to be installed.

In most cases, you are going to need to download the software onto your computer first, and then install it that way.

Of course, you could also go to your local Toyota dealership, and they will be able to install the software updates for you (if any are available).

However, we cannot stress enough how unlikely it is that software will be the problem for your vehicle. It is rare that a Toyota Smart Key will work and then magically stop working due to a software glitch.

It is more likely that you will need to reset the system, which leads us neatly to the next step for dealing with that Toyota Smart Key system malfunction!

Once again, we do want to point out that resetting your system will vary between Toyota models. You will always need to check the manual for your specific vehicle to get the exact process.

However, we can give you a general overview here:

This should be enough to reset the system. If it doesn’t then, sadly, you have one other option available, and this option is only there because you have completely exhausted everything else that you can possibly do to your vehicle.

Head To a Toyota Dealership

As we mentioned at the start; Toyota vehicles are incredibly complicated. While you may be able to fix the vast majority of Toyota Smart Key System malfunctions yourself, you won’t be able to fix all of them.

We suppose that this is a good thing, to be honest. After all, you want your Toyota vehicle to be as secure as possible.

If the vehicle is not recognizing the key, then it is better that it doesn’t open rather than open for anybody, right?

Your only option is to head to your local Toyota dealership. We do not recommend that you head to a local garage here.

Not that your local garage may not be able to deal with the problem, but you will often find that Toyota dealerships tend to be a little bit better at getting to the root of the issue.

As we also said before, it is a common issue for Toyota vehicles, so they will easily be able to carry out the diagnostics.

If your vehicle is in warranty still, you may find that you don’t even have to pay for your vehicle to be dealt with.

What to do if your Toyota smart key stops working >> Check out the video below:

The Toyota Smart Key system is awesome, but there is no denying that there could be a few issues with it.

Thankfully, most of the issues are going to be easy to fix. In 90% of cases, it is probably going to involve either replacing the battery for the system or resetting the system completely.

It is worth noting that you can still drive your vehicle, even if there is a malfunction in the Toyota Smart Key system.

However, it is not really something that we would encourage you to do if you can help it. This is, mostly, down to the fact that it requires a lot more effort each time that you want to use your vehicle.

Do you know how to fix Toyota´s electric power steering problems? Well, you are at the perfect place to find the answer to such a question. Gone are the days when power steering would be a system...

Do you know how to fix a Toyota charging system malfunction? Well, you are at the perfect place to find the answer to such a question. One of the most common issues with Toyota vehicles is the...