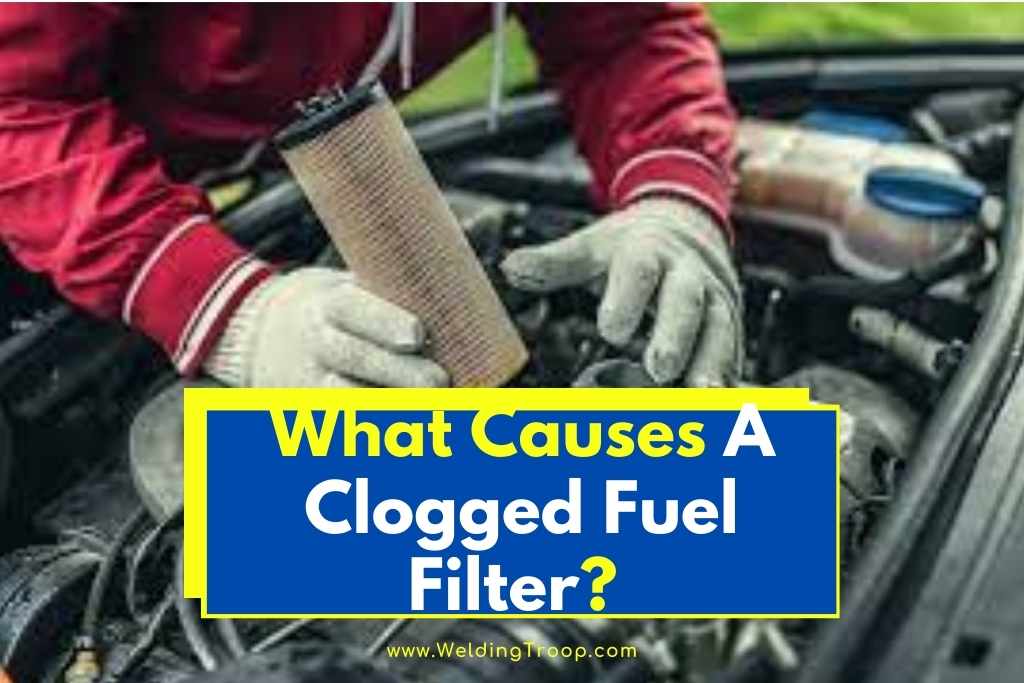 The main cause of clogged fuel filters is some contamination of the fuel itself. This contamination can come from different sources.

Here are the 4 main reasons for clogged fuel filters:

3. Water In Fuel And Tank

So, let’s get into the details of this problem.

What Causes A Clogged Fuel Filter?

As I’ve said above, a clogged fuel filter is caused by contamination of the fuel that comes to it. There are several contaminants that can cause this and also several ways that they enter the fuel system.

In some of these cases, you can have an impact and often prevent them, thus treating the root cause of this problem.

The alternative is to keep changing the fuel filters and hope for the best and that some other part will not fail because of the clogged fuel filter.

People usually think about rust as something which is caused by water, but motor fuels are relatively corrosive fluids.

And they are kept in metal tanks, and often transported to the engine by metal fuel lines. This rust will slowly chip off and reach the fuel filter.

When it comes to vehicles, this is a common problem with older cars.

But, the gas station underground tanks can also rust.

Gas station underground tanks are not always properly sealed, also there can be some water in the fuel they get besides the amounts that over time seep in, along with dust and dirt.

While this water usually will not reach your tank, it creates conditions for algae and bacteria growth in the tank.

With dirt that can be in tanks, these create silt which could reach your fuel tank and eventually clog the fuel filter.

3. Water In Fuel And Tank

If you think that small amounts of water that could enter your gas if filling it up in rain is not a big deal, you would be right. Until it becomes a big deal.

Just like the moisture in gas station tanks leads to mold and algae growth, over time it can happen to a gas tank on a vehicle.

And it will lead to fuel filters getting clogged very frequently.

In the same way that small amounts of dust and debris fall into gas station tanks, they can get into your tank too.

And in the same way, it will eventually create a big enough build-up of dirt on the filter to make it clogged.

What Is A Fuel Filter

A fuel filter is a very simple device that is filtering the fuel and removing all unwanted things from it. Like practically all other filters, it has an inner material with many small openings through which the fuel can pass, but not the contaminants.

Because they stay in it, over time the filter will become clogged, and the fuel flow will be constricted.

This in turn will lead to various problems in the engine’s operation, which we will cover later on.

There are many manufacturers of fuel systems for motor vehicles and everything else with an internal combustion engine.

And many different shapes and sizes of fuel filters. But, all of them can be divided into several types based on three characteristics:

So, let’s get into some details of these divisions and the types of fuel filters you might find as part of the fuel systems of internal combustion engines.

There are two types of fuel filters based on the location in the fuel system they occupy, which depends on the manner in which the fuel pressure is regulated.

These are the inline and in-tank fuel filters. Inline fuel filters are found in engines with return-type fuel systems, in which the fuel pressure is regulated by the vacuum level in the intake manifold.

In-tank fuel filters are found in engines with return less fuel systems, where the ECM is controlling the fuel pressure and fuel pump operation based on the measured parameters of the engine.

There are two types of connections that can be used to connect the fuel filter body to the rest of the fuel system. And because of this, filters can have two different kinds of connectors.

They can be smooth for the push-on connection, where fuel lines are slipped on and held tight by clamps.

But they can also be threaded for use of compression fittings.

Not all fuel filters have the same filter material through which the fuel flows and which catches the contaminants in it.

The most common type is the paper filters, and this is a very similarly designed material to other filters you might find in a vehicle. Such as oil and air filters.

The second, and much rarer type are with metallic mash, which is much more expensive to build, though much longer lasting.

What Are The Symptoms Of A Clogged Fuel Filter

The first symptom of a clogged fuel filter is the check engine light. It will come on. But, that light could mean many different things, some very serious issues and some not so serious.

The clogged fuel filter will produce other symptoms too, so let’s get into details of what are the other things to look for.

When you depress the gas pedal your vehicle doesn’t accelerate as it used to, or your generator is throwing various error codes when you use it for powering devices near to its maximum output.

In both cases, a clogged fuel filter is preventing the engine to get enough fuel to produce the power level it is asked to.

If the engine is not getting enough fuel to properly sustain combustion and spin the crankshaft, it will be a problem to start it.

How fast the crankshaft turns depends on how strong the explosion in cylinders is, which in turn depends on the amount of injected fuel. A very clogged filter can cause the engine to even fail to start.

Not enough fuel can lead to cylinder misfiring because the amount of fuel they get changes due to a partially clogged fuel filter.

Simply, not enough fuel in the mixture means that it won’t be ignited by the spark. This can be very noticeable when idling.

Misfires of an engine can be noticed also by the fact that when accelerating the engine is surging, and instead of having a smooth increase of speed, it kind of stutters and falters then after a moment, it picks up again.

This is, of course, caused by the irregular fuel flow due to a clogged filter.

When the engine works at high RPMs, the fuel-air mixture will be richer than at lower RPMs. This helps with cooling the engine, as when the fuel evaporates in the cylinder it really soaks up the heat.

If the engine temperature spikes at high RPMs, you can be certain that the mixture is not getting richer when needed due to obstructed fuel flow.

So, the cooling effect of the vaporization of fuel is decreased or completely lost, and the temperature spikes.

When a spark ignites the fuel, the flame propagates from it through the rest of the cylinder because there is a proper and uniform concentration of its droplets.

In case of the clogged, there may not be enough fuel to propagate this explosion through the whole volume of the cylinder, leading to incomplete combustion.

This in turn means that some fuel will end up in your exhaust, completely wasted.

The fuel pump will always try to supply enough fuel to the engine depending on the demand for power, depressing the accelerator pedal, and various engine parameters.

A clogged fuel filter slows down the fuel pressure after it, which in turn pushes the fuel pump to work harder, more often, and for longer.

Eventually, this strain will cause the fuel pump to fail.

How To Fix A Clogged Fuel Filter

Fuel filters are designed to be regularly replaced, they can be considered consumable. The vast majority of engines, regardless of their application have paper-type filters.

These filters cannot be cleaned, and so when clogged can’t be repaired either. And the only solution is to replace it.

In case it has the metal mash filtering material, it can be cleaned, or in other words, repaired.

How To Prevent A Clogged Fuel Filter

A clogged fuel filter can’t really be prevented, cleaning the fuel tank before it gets sludgy and dirty might not be always so easy.

But, the use of high-quality fuel will slow down this process, and also will extend the life of fuel lines. So, the only practical way to prevent clogging is to have the fuel filter replaced in time.

The rule of thumb is to replace it every 2 years or 30,000 miles, or sooner if so recommended by the manufacturer.

My Clogged Fuel Filter Causes Stalling & Hesitation >> Check out the video below:

What causes a clogged fuel filter is the contamination of the fuel, and in many cases, it can’t be avoided.

Over time it will build up on the filter, and that is the main filter’s function as it prevents those contaminations to reach the engine. So, the best thing to do is to replace it in time.

link to Can a Clogged Fuel Filter Unclog Itself? (Full Guide)