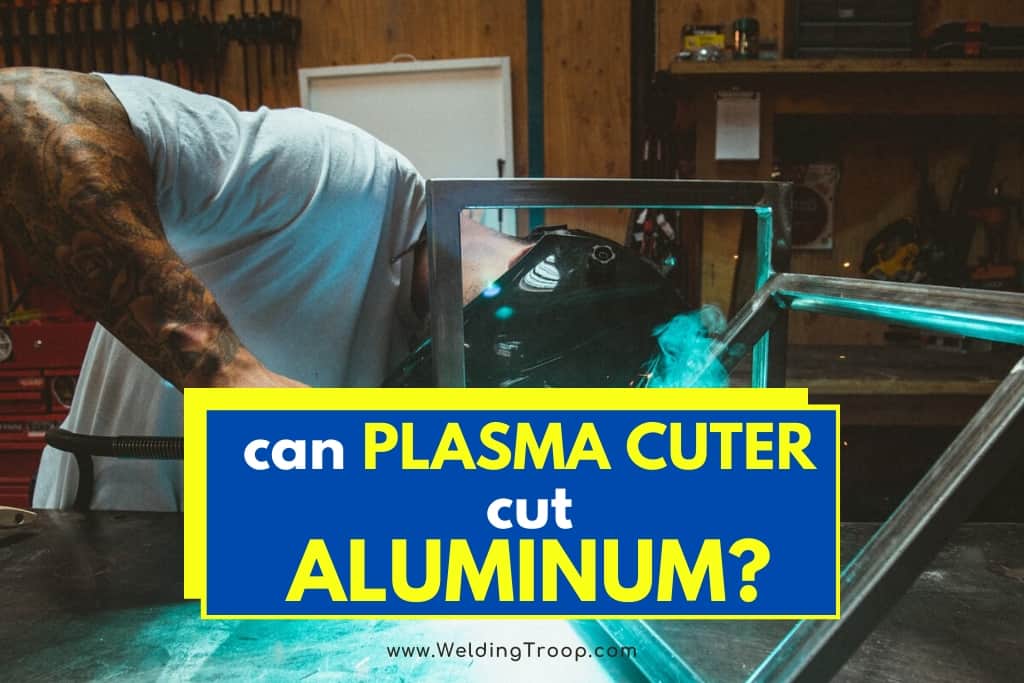 One of the frequently asked questions from our readers is: can a plasma cutter cut aluminum? Well, plasma cutting machines have come a long way since the late 1990s, which is the period many people think of when referencing plasma cutters.

Plasma cutters now have the latest technology that easily allows them to cut through any type of conductive metal.

Many people fail to realize how far plasma cutting technology has progressed in the past decade alone. This plasma cutting guide of sorts will give you knowledge of how plasma cutters work and their potential applications, which can save you lots of money and time when conducting projects.

Plasma cutters cut aluminum, along with other conductive metals, by using a concentrated stream of ionized gasses. Common types of metals plasma cutters can cut through include:

Plasma cutting works by using ionized gasses. The ionized gas has more protons or positive ions than it usually would in nature, making it super-heated. It changes into another state of matter called plasma.

It is the interaction between the plasma protons and the metal that allows plasma to cut through conductive metals.

The protons are attracted to the conductive metal, which has a slightly positive charge, much like the opposing poles of a magnet. When the plasma gas comes into contact with the metal, the electrons from the plasma are transferred to the metal.

Being in an ionized state means that the electrons can freely move between the atoms of the gas and to the metal. The transfer of these electrons creates heat energy and essentially melts the metal that it comes in contact with. The melting of the metal creates a clean, uniform cut through the metal.

The two gases which are used in Plasma Cutting are oxygen and Nitrogen. Both of which have to be almost 100% pure, or at minimum 99.5% pure for oxygen and 99.995% pure for Nitrogen. The consequences of using any less purity gas than recommended are:

A process called gas swirling is utilized in many plasma cutting machines because of the benefits that it provides in the process. The process works by using the fact that only 30% of the gas is ionized, leaving 70% of the gas non-ionized.

The non-ionized particles act as a temperature barrier to protect the copper alloy nozzle from melting.

This allows the plasma arc to keep in constant, even contact with the metal surface without anything getting in the way.

Overall, the breakthrough of utilizing the concept of swirling the gas gives numerous benefits that were not previously seen in the early ages of plasma cutting.

The nozzles are typically made of a copper alloy because of its heat retention properties and electrical conductivity properties. The copper nozzles are protected from the majority of the heat created by the plasma arc by a process called gas swirling.

The gas used for plasma cutting is not fully ionized. In optimal conditions, roughly 30% of the gas is ionized, leaving 70% of the gas in a non-plasma state, as mentioned before.

There are many types of nozzles you can use on your plasma cutter that have a range of orifices. The size of the hole is vitally important because it is what determines the size and the voltage of your arc. The smaller the hole, the larger the arc and voltage are.

You would want a smaller orifice when you are cutting:

If you exceed the maximum temperature, your nozzle can melt, or it significantly reduces the lifespan of your nozzle.

There are many benefits of plasma cutting over any other form of cutting, especially in today’s time.

When people rule out plasma cutting for projects, they are commonly stuck in the mindset of the 1980s to the 1990’s age of plasma cutting, which was barbaric when compared to the technology of today.

Plasma cutting technologies have been able to increase the ability from plasma to be able to cut through an inch of metal to now being able to cut up to six inches of metal relatively quickly.

The development of swirling the gas and others has led to being able to increase the current levels and arc size of the plasma cutter significantly.

The technological breakthroughs that have been occurring with plasma cutting have made the ability to use the cutting platform cheaper, more cost-effective, and faster.

The Future of Plasma Cutting

Recent innovations in the ability to control the power and size of the arc have led to plasma cutting being used for more complex cutting projects.

The technology advancements also have led to better accuracy when cutting and a more uniform cut through the metal not seen in the early days of plasma cutting.

This process involves making the parts of the machines last for more extended periods and the reduction of the price of these parts.

The process of using plasma cutting has undeniable benefits compared to other ways of cutting through metal and is no longer tainted by the early, barbaric, plasma cutting platforms.

What are the Advantages and Limitations of Plasma Arc Machining?

How to Weld Aluminum at Home >> A Beginner’s Guide

I created this resource page to easily list recommended tools, and equipment that I use and/or those I know are valuable. This way you can quickly find great products all in one...

Continue Reading
link to How To Setup and Build a Trailer Frame: 11 Easy Steps

Have you ever wondered how to setup and build a trailer frame? Look no more. We´ve got you covered. Trailers can be expensive. Therefore, it isn't really a surprise that there are so many people...

Together we have more than 34 years of experience in the industry.
We strive to inspire and inform mechanics, car users, and new welders through skill-based tutorials, comprehensive training guides, and in-depth gear reviews.
.....for more please view "the team".

We are a participant in the Amazon Services LLC Associates Program, an affiliate advertising program designed to provide a means for sites to earn advertising fees by advertising and linking to Amazon.com. WeldingTroop.com also participates in affiliate programs with CJ and other sites. We are compensated for referring traffic and business to these companies.