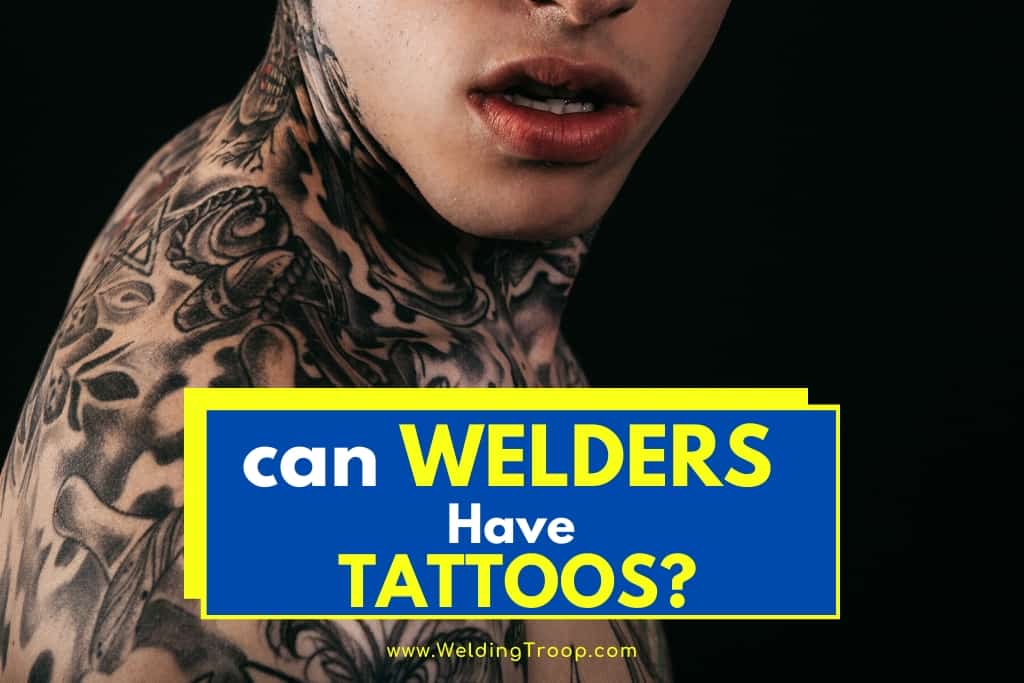 Have you ever wondered if welders can have tattoos? You’ve chosen to become a welder because you love working with your hands, and aren’t afraid of tough stuff. Welders are needed in almost every industry. Some of you experienced welders out there even think of getting higher-paid jobs because your opportunities in this field are endless.

Can Welders Have Tattoos? Yes, welders can get a tattoo, provided they abide by the rule of thumb: your tattoo has to be three fingers width from the wrist up to the end of any sleeve. There are no direct hazards related to welding and tattoos, but you have to seriously think before getting one. Getting a tattoo has become the latest 21st-century fad. However, there are many industries that still have concerns about hiring tattooed applicants. So getting a tattoo can have some limiting Career Paths.

In this article, I will attempt to answer this question objectively. Can welders have tattoos?

A Brief History of Tattoos

By the end of the 19th century, tattoos were looked upon as bold drawings that were designed for the working class.

Actually, this brash habit was only for seamen at the time. Then, soldiers began to have them as a symbol of courage and patriotism. Tattooing was a picked-up custom during their travels to Asia, Africa, and the South Pacific, where sailors and soldiers traveled frequently.

Back in America, working-class men had tattoos as a symbol of masculinity and pride. Later, some cults of the late twentieth century began practicing tattooing as a form of personal expression.

What was considered taboo then, became a booming career field for many artists. In fact, in the late 1980s, the number of tattoo artists doubled. That was in part because they had no means of finding employment. But evidently, they had many customers willing to use their services.

Related Article: Do Welders Get Drug Tested? | All Facts You Need To Know

Ever Since, the tattoo culture has emerged.  And, what was previously known to society as tattooed people being less educated, less refined, and more aggressive, emerged into mainstream culture. Everyone suddenly wanted a tattoo!

Why Get A Tattoo?

Well, the answer to that differs from one person to another. But, if I were to outline some of the significant reasons, they would be as follows:

Many get tattoos to express an idea or even to feel a part of a larger group. There are plenty of welder tattoos meant to show their nature of work portraying fire, blazings, and toughness.

Many people have experienced emotional downfalls, and one form of keeping a memory is to engrave it for life on your skin. It’s like you’re carrying it with you wherever you go.

Actually, that would be a good reason to have a tattoo. You can easily cover up birthmarks, burns, or scars that you don’t like being on you.

A Form of Inspiration

Some people get tattoos as a message. The message is perhaps their motto in life, such as “Keep moving on” or an art piece that inspires them to never give up.

There’s something about tattoos and self-confidence. Maybe people just feel that they have more control over themselves. It’s actually considered “cool”, and it’s a great conversation starter.

With all the correct reasons to get inked up, you have to be sure that you want them marked on you for life. Because when you do, it’ll be very difficult and painful to remove them.

Nevertheless, welders should take care if they decide to take on a more prominent career. Inking up your body can surely stand in the way.

Welding is the ultimate green-collar career. You are highly in demand by a plethora of industries.  Working in welding doesn’t limit your opportunities for further self-development. You can actually get an extremely well-paid job in many fields you didn’t even know existed.

Your job as a welder is unique. It’s not about wearing a big face mask joining two bits of metal together. It’s about precision and accuracy. And it would be great if you could open up your career lines and seek opportunities for development.

Learn More About Welding career – Here, you can find an article from our website about: Advantages of Being a Welder >>Salary, Working Hours | Worklife Balance

Among many advanced careers and jobs you can get are assemblers and fabricators, jewelry makers, welding machine operators or inspectors, and welders on ships or space shuttles.

Having said that, many employers don’t want to hire a worker that is tattooed. Still being stigmatized to this day, some businesses are conscious about their image and they want people who are representatives of the quality of their work output.

The chances of people being hired without tattoos are far greater than those with tattoos.

Downsides of Getting a Tattoo

Here are a few reasons why you might want to think twice before getting a tattoo.

There are many jobs where tattoos are not permitted. Some employers still have a negative reaction to them.

Our skin is made as a defense mechanism to outside dangers. There is no way of guaranteeing the cleanliness of the tools used. This might make you prone to some diseases that can curb your future all together.

You can never be sure that after 12 years you will still want your tattoo on you. They will stick on you, and maybe the reason you put them might become a bad reminder. Removing them is a terribly painful ordeal as well as very expensive.

You might be the type of person who has sensitive skin. Many reactions are developed from tattoo ink resulting in skin rashing and itching.

Before you consider going to get a tattoo, think of your future path. As a welder, you have to carefully weigh the good stuff and the bad stuff.

As mentioned before, there are no direct negative implications related to your job and getting a tattoo. Just make sure that if you do indeed get one, you’ll want it forever.

Also, don’t put a tattoo anywhere on your body that you can’t cover up! You never know when your dream job might show up, and when that happens, you’ll be ready to move on.

How to Properly Clean a Welding Helmet Lens – Fast and Easy

Can You Look at the Sun or Eclipse with a Welding Helmet? Is It Dangerous?

Welder Tattoo Artwork >> Check out the Video below