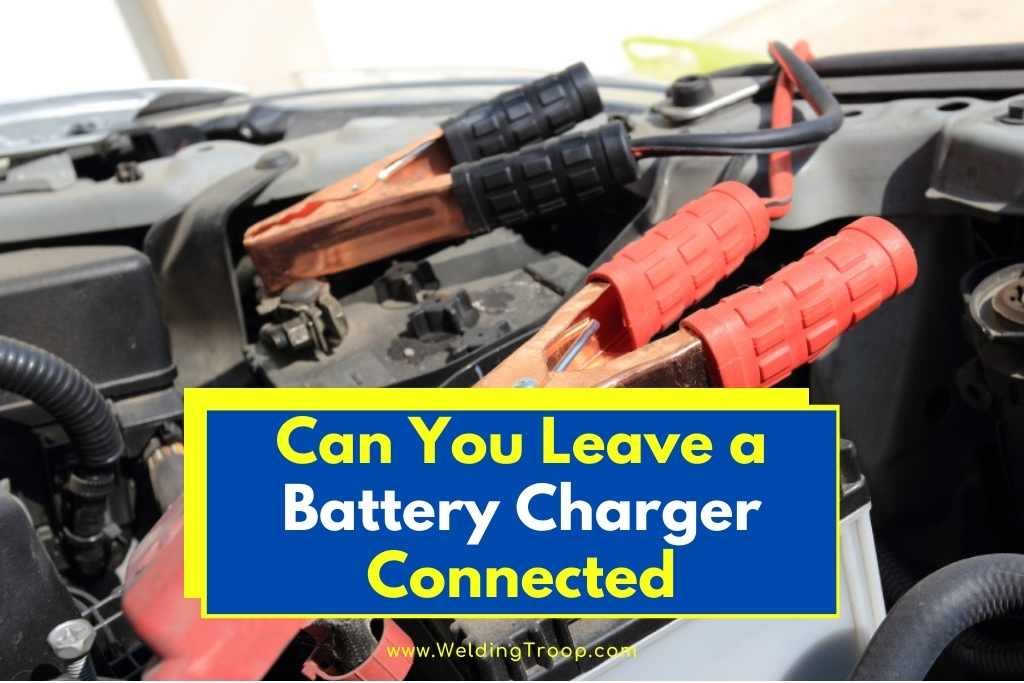 Do you know if you can leave the battery charger connected, it this safe? Well, you are at the perfect place to find the answer to such a question.

Every so often, your car’s battery will need to be charged. The process is simple. You remove the battery from your vehicle, you plug it into your car charger.

The whole process will take minutes. Of course, this does beg the question of whether you can leave the battery charger connected to your battery, or whether you should remove it as soon as it is charged.

Luckily, we are going to answer that question for you!

Can You Leave a Battery Charger Connected?

That being said, there is still a risk there. The smart charging feature of your battery charger may fail. It may incorrectly detect that the battery is fully charged, which means it may end up overcharging the battery.

It is also worth noting that batteries have a limited number of charge cycles. This doesn’t mean one complete discharge of the battery and one full charge. A cycle is completed each time the battery charger needs to charge that battery.

If your battery loses some of its charges while connected to the charger, it could be put through another charge cycle. This could lead to a shortened battery lifespan.

The one exception to this rule is if you have a trickle charger. If you are trickle charging your car battery, which some people do when they are leaving their vehicle in storage, then you could (in theory) leave the car battery connected up to the charger indefinitely.

However, we do suggest that you check on that car battery every so often, just to make sure that it is charging properly.

When Should You Remove The Battery Charger From Your Car Battery?

Ideally, as soon as the car battery is fully charged, you can remove it from the charger. There is no need for that car battery to be connected to the charger for any longer than this and, if you do, then the risk of there being issues will increase considerably.

How long your battery takes to charge will be dependent on the charger that you are using, as well as your battery.

Most modern battery chargers will have some sort of indicator on them that will tell you when the battery is fully-charged!

Because battery chargers can take a while to charge a car battery, you don’t have to hang around and wait for the charge cycle to complete. If you are using a smart charger, then you should be able to get away with leaving that battery connected to the smart charger for up to 24 hours.

This shouldn’t cause any issues with your car battery, assuming the charger is in a good condition.

Once again, this information is only going to apply if you are doing a standard charge of your car battery. If you are trickle charging, then you can leave the battery on the trickle charger for an indefinite amount of time.

Although, we do encourage you to check that battery every couple of weeks or so, just to ensure that everything is in order.

Is It Safe To Leave a Car Battery Charging Overnight?

Yes. It is 100% fine to leave your car battery charging overnight. Assuming that you are using a quality battery charger, then it poses absolutely no risk. You don’t have to worry about that battery overcharging.

Of course, if your battery is fully charged before you head to bed, you should disconnect it. There is no sense in leaving something charging on a charger if there is no need to do so.

How Do You Charge a Car Battery Safely?

By now, you will know that it is fine to keep a car battery connected to a charger for a short period of time. However, we do want to talk a little bit about charging that car battery safely.

This way, you do genuinely know everything that there is to know.

By now, you will already know that you need a quality charging system. Buy the best one that you can afford. Don’t pull out an old charger. Many of them could cause your battery to overcharge because they do not have smart charging features built into them.

Always read through the manual of the charging device, because how you connect the battery can vary from product to product.

Most of the time, you will need to plug the battery into the charger before you connect to the mains. It is a safety issue.

When the charging process is complete, you will want to turn off the charge and then unplug it from the mains. Do not touch the battery until you have done this.

You could run the risk of a shock. In rare cases, the battery may be a bit too hot to touch. Let it cool down for an hour or so before you remove it from the charger.

While, in theory, you can leave a car battery connected to a charger, it isn’t something that we would really recommend.

If you leave a car battery connected to a car charger, then there is the risk of the lifespan being shortened, or perhaps overheating of the battery (if the charger fails).

You should not leave a battery connected to a charger for more than 24-hours. You can leave it as long as you want if you have a trickle charger.

link to How Long To Charge a Dead Car Battery With Alternator?

Do you know how long does it take to charge a dead car battery with alternator? Well, you are at the perfect place to find the answer to such a question. The alternator is one of the most...