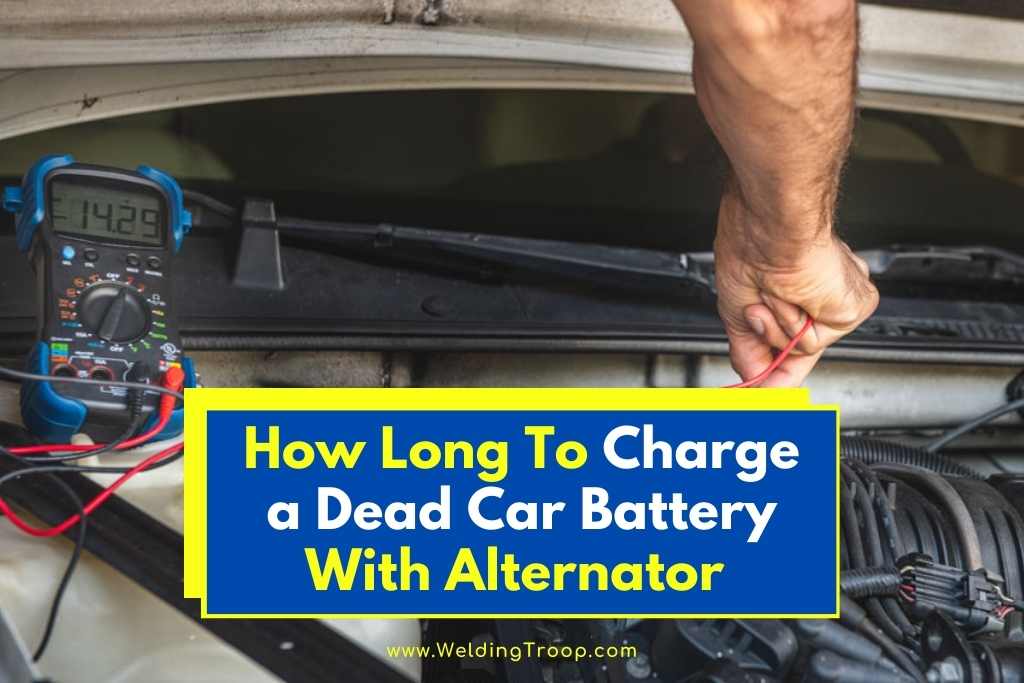 Do you know how long does it take to charge a dead car battery with alternator? Well, you are at the perfect place to find the answer to such a question.

The alternator is one of the most important components in your vehicle. Obviously, your vehicle has a battery in it.

This battery is required for making sure that the electrical systems are kept up and running. The alternator helps to keep the car battery charged.

If there is some charge left in your battery and your jump-start is successful, then your alternator will take around 30-minutes to get that battery charged enough that you can drive your vehicle properly again.

A lot of people wonder whether an alternator can charge up a dead car battery, though. Let’s explain.

What Is An Alternator?

An alternator is a system that converts the movement of various mechanical parts in your vehicle into electrical energy. This helps to keep power flowing into your vehicle’s battery.

The alternator in your vehicle is the reason why you don’t need to charge your vehicle’s battery all that often.

In fact, as long as you are driving your vehicle while you have the electrical systems turned on (even if your vehicle is switched in idle), you probably won’t have to charge your battery until it has completely died, and that is going to take a while.

How Long To Charge a Dead Car Battery

As you know by now, an alternator may take around 30 minutes to get an almost dead car battery running again, but it won’t help a dead battery. You will need to get a battery charger for this.

How long the battery charger will take will be dependent on your vehicle’s battery, as well as the charger that you have purchased.

Most dead car batteries will be fully-charged overnight. In the best case scenario, everything is going to be done in around 8 hours. So, park your vehicle in the evening, pull out that battery, and charge it while you sleep. In most cases, this is going to prevent the need for a jump-start.

If a car battery charger isn’t enough to charge your battery, then chances are that you have a properly dead car battery and will need to replace it (most car batteries rarely last more than 3-5 years, depending on how often you are using it).

Can An Alternator Charge a Dead Car Battery?

This is where a bit of confusion lies. The job of an alternator isn’t to charge your car’s battery. It is to keep it topped up. It essentially trickle charges a battery as you drive.

While we are sure that an alternator could charge a dead car battery if given enough time, there are different ways to do it.

One of the main reasons why people believe that an alternator charges a dead battery is because the alternator gives the illusion that it does.

You aren’t jump-starting your vehicle because the battery is actually dead, though. There is some charge in your battery, just not enough to run your vehicle.

However, if your jump-start isn’t successful, then you likely have a battery that has been fully drained (this can happen if you leave your vehicle’s electrical systems running without the engine on), and the alternator isn’t going to help here.

Instead, you are going to have to look for other methods.

Don’t worry. It is highly unlikely that a car battery will fully die. Your alternator will be able to charge it up most of the time. We would say in about 90% of cases, but it won’t always be useful.

Alternatives To An Alternator For Charging a Dead Car Battery

As we said, an alternator is never going to charge a truly dead battery. If it does charge the battery, then it means that there was a little bit of power left in the battery.

This is fine. Sometimes, there is going to be just enough power in the battery that you don’t need to haul your battery out of that vehicle and actually charge it. However, as we also said, sometimes that battery is completely drained, and you have no other choice.

You may also find that the battery isn’t holding a charge for all that long before it needs to be jump-started again.

Although, in the latter case, you will probably want to double-check to ensure that your vehicle’s battery doesn’t need to be replaced. Batteries don’t last forever, after all.

If you genuinely want to charge a dead car battery, then you are going to need to pick up a car battery charger.

They aren’t that expensive, and they are handy to have around. You will likely need to remove the battery from your vehicle, though.

There are some that will allow you to keep your battery in your vehicle, but these tend to be trickle chargers and they are not great for getting a dead car battery up and running again.

An alternator will not charge a dead car battery. It will stop a battery from being fully discharged while it is in your vehicle, but if something has fully-drained your car battery, then you will need to use a charger.

The alternator may give it enough juice to get you home, but you would need to be driving a lot of distance to get a dead car battery fully charged with an alternator, and, even then, the car may still need jump-starting later on.

link to Can You Leave a Battery Charger Connected? (Is It Safe?)

Do you know if you can leave the battery charger connected, it this safe? Well, you are at the perfect place to find the answer to such a question. Every so often, your car's battery will need to...

Continue Reading
link to Is it Illegal to Remove Check Engine Light? (Do This Instead)