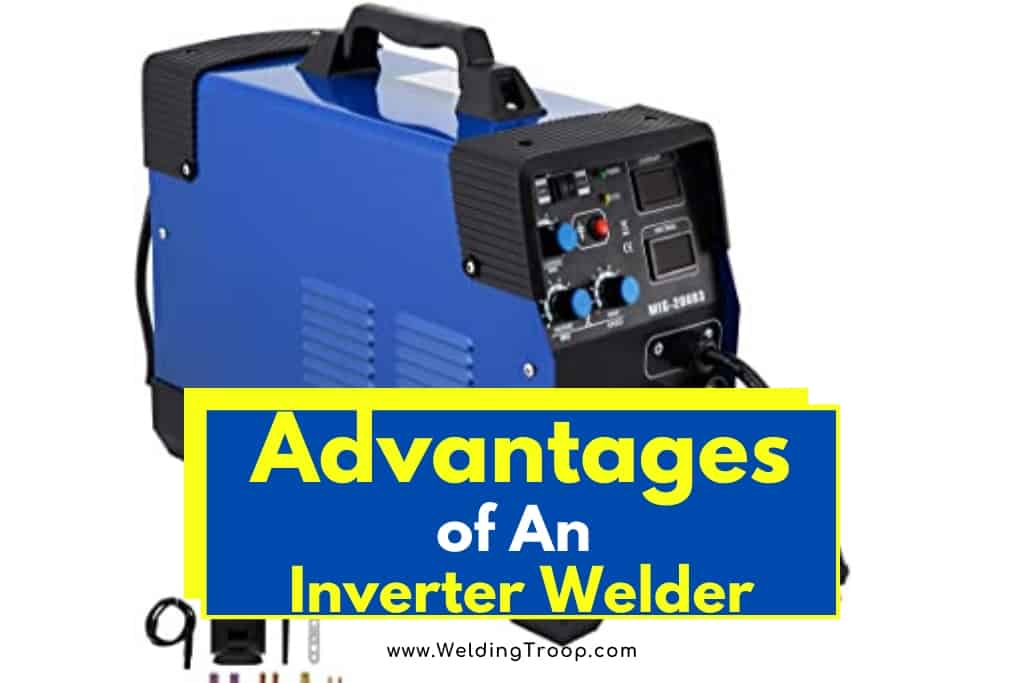 Welding technology has improved significantly in the last fifteen years, but what are the advantages of an inverter welder? Although traditional transformer welders are still in wide use today, a growing number of welders are relying more on inverter models.

What are the advantages of an inverter welder?

Electric arc welding became widespread during World War I and remained the most common type of welding. The transformer design of welding machines was dominant in the industry until inverter models began appearing in the 1990s. Although the inverter models were initially more expensive than transformer models, the machines are now nearly the same cost.

In the twenty-first century, inverters are more reliable and trusted by welding professionals. Improvements in inverter designs have solved many of the maintenance issues the machines faced in their early inception. The compact inverter welders conserve power, use household outlets, feature several processes, and allow you to choose numerous components and electrodes.

What Advantages Does An Inverter Welder Offer?

Inverters have come a long way since their inception over twenty years ago. Early on, inverters suffered component failures and increased maintenance costs.

However, the improvements in digital technology have erased most of an inverter’s problematic past. The advantages of inverter welders have converted many proponents of transformer welders.

Inverters are much smaller and lighter than their transformer counterparts. A standard AC arc welder weighs over a hundred pounds, and a new inverter weighs about 21 pounds. With 1/5 the weight of a traditional welder, inverters make traveling and storing your welder easier than ever before.

When you receive a call to complete a job in the field, you no longer have to use the company truck to haul your equipment to the field.

If you have a compact car, you can fit your inverter welder and all of your equipment in the trunk. For high elevation jobs and tight, compact spaces, inverters are ideal.

Related reading: How to Start & Grow A Welding Business In 11 Steps

A significant difference between standard AC welders and inverters is the power output. Traditional welders use a large transformer to produce power, and the power output ranges between 50% and 60%.

That means that at least 40% of the power is not emitted to the welder. Where does the lost power go? It escapes as heat and increases the temperature of the machine and its internal components.

In comparison, an inverter’s output ranges from 82% to 90%. The increased efficiency of inverters protects the machines from overheating.

Unlike a standard arc welder that requires a 220-volt outlet, inverters use household current (110 volts). You can plug an inverter into any standard outlet, and you’ll use less power when you operate an inverter.

Since inverters use less power to function, you will save money on your power bill, and you can use several welders without the worry of blowing a fuse. If you manage a welding shop, you’ll save on operational costs if you stock your shops with inverters rather than solely using traditional welders.

The internal components of welders can become extremely hot after several hours of welding. The continuous heat can cause parts to fail and decrease the lifespan of the welder.

Similar to the setup of a desktop computer, inverters include a cooling fan to protect the components from heat.

When you have to leave your shop for an off-site job, you’ll probably need a generator if you’re unable to access an outlet for your welder. Generators come in various sizes, but only a large generator is capable of supplying power to a traditional welder.

Another problem welders commonly face while welding outside is generator power fluctuations. Unlike a standard outlet connected to the power grid, generators are prone to fluctuations. If your power changes when you’re in the middle of welding, you cannot control the arc or the weld pool.

With an inverter, a generator power fluctuation will not affect the quality of your welds. Newer inverter welders include Insulated Gate Bipolar Transistors (IGBT).

This new technology handles the machine’s voltage regulation, and it allows you to work with an old rickety generator that has inconsistent power output. Standard welders can incur damage during a power fluctuation, but an inverter uses its software to compensate for any voltage changes.

Unlike a standard welder that uses AC and AC electrodes, inverters convert the alternating current to direct current. Inverters can take a high voltage AC input and change the current to a lower voltage DC output.

Related reading: What Does DCEN Stand for in Welding?

Stick welding remains a dominant process in the world of welding. Still, other methods such as MIG and TIG accomplish durable welds on materials and situations that are not feasible with an arc welder.

Before inverters, you had to use a different machine if you wanted to switch from stick welding to TIG welding. Premium inverters allow you to use one machine for several types of welding.

Inverters have simple components that you adjust to allow for a new process, and most models include a MIG gun, a stick holder, and the corresponding cables. Instead of purchasing separate components for each process, you’ll find all your essential equipment in one inverter purchase.

Compared to standard arc welders, inverters offer superior control of the electric arc. A stable and easily controlled arc is essential to producing viable welds. The inverter’s software allows you to customize how you control the arc.

Because inverters have a higher open-circuit voltage than standard machines, inverters are easier to start and maintain an arc.

Standard machines rely solely on AC to weld, but inverters convert the AC to DC. When you weld with DC, you can pick a variety of electrodes that work with DC- and DC+.

Although some electrodes can be used with any current, the specialized electrodes are designed for specific tasks. If you only use an AC arc welder, your options for welding jobs are limited.

With an inverter, you can begin the day by welding stainless steel and switch over to an aluminum rod in a few minutes.

What Are the Disadvantages of Inverter Welders?

Although an inverter’s advantages far outweigh the disadvantages, it’s worth mentioning a few problems that are common with inverters.

As you may already know, the most inexpensive tool will not last you a lifetime. Inverters are amazing machines if you are willing to pay more than $200. The cheapest inverters cost less than $80 and are poorly constructed welders that have few features.

If you’re lucky, you can use a cheap inverter for a few months before it fails. The repair cost of an inexpensive model can be half as much as the value of the machine. When you shop for inverters, spend the extra money on a quality machine that will last for several years.

Some traditional AC welders have kept the same design for over fifty years and are inexpensive and straightforward to repair. Inverters are more complex and contain software and electronics that are not present in standard machines.

After your warranty expires, you’ll pay a little more to service an inverter. One way to avoid high repair costs is to extend your original warranty. Some manufacturers allow you to buy an extended warranty at the time of purchase.

Although the compact design of the inverter is practical when you work off-site, it is not as tough as a bulky AC welder. The lightweight inverters are more susceptible to damage from a heavy drop or dusty environment.

If your inverter becomes coated with airborne particulates, like those present in a grain silo, the machine’s internal electronics can incur damages and possibly fail.

If you have used a standard AC welder for several years, you might consider trying a new inverter model. With numerous advantages over a traditional machine, an inverter allows you the freedom to choose any process and customize your arc for incredible results.

So, you can plug your new inverter into a standard outlet and weld with confidence and precision.

Inverter Welders Vs. Transformer Welders >> Check out the video below