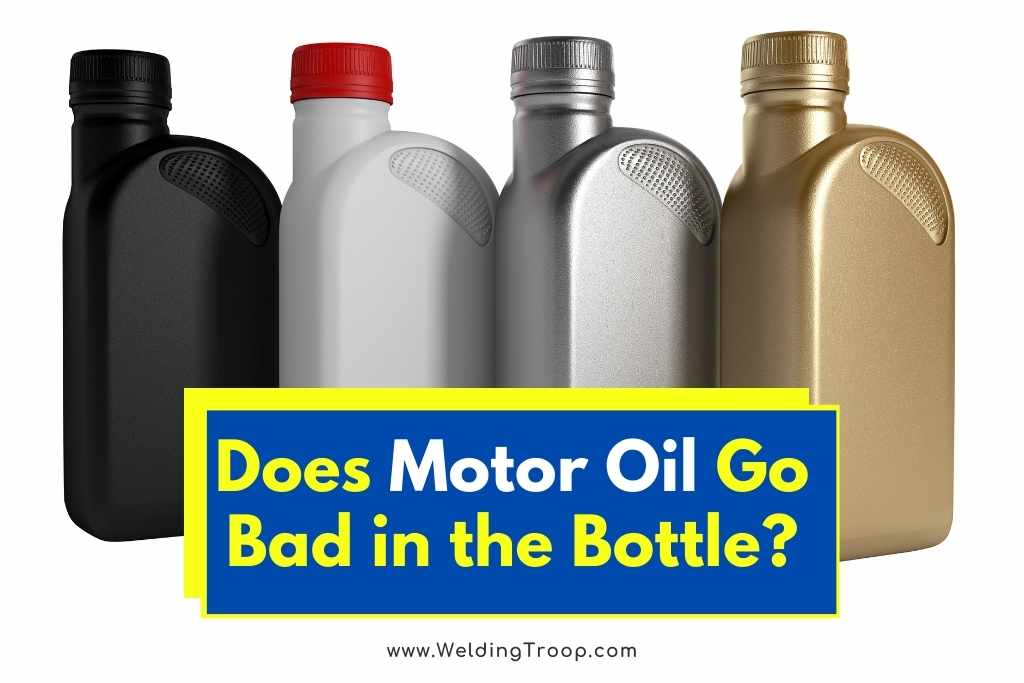 Motor oil is a crucial part of a healthy car engine. The oil keeps things running smoothly while the engine is in operation, and it eventually has to be replaced.

But what if you aren’t driving the car? What if the oil never leaves the bottle, you bought it in? Can it still go bad? Does it “spoil”, as it were?

Well, yes, it can. Even if it never leaves the bottle, motor oil will eventually go bad. But let’s talk about what that means.

What Does it Mean for Motor Oil to “Go Bad?”

Motor oil doesn’t go bad in the same way that food does. It’s not that it suddenly transforms into mush over time. Motor oil goes bad in the sense that its ability to fulfill its purpose decreases over time. There are several reasons for this, but of particular note are the viscosity and ingredient separation.

Motor oil needs to have a certain level of viscosity to effectively do its job in an engine, lubricating the various parts so they run smoothly. That viscosity level will change over time until the motor oil is so think that it can’t really do its job well any longer.

As for ingredient separation, you have to remember that motor oil is not just a single ingredient: it is multiple ingredients combined into one product.

On average, a bottle of motor oil is about 20% additives. Due to time, heat, direct sunlight, and oxygen exposure, these additives can ultimately separate from the rest of the oil.

Read also >> Is Replacing Engine Oil The Same As An Oil Change?

Read also >> How Long Does Oil Last In a Car Not Driven? (Here Is Why)

Needless to say, the motor oil needs to have the ingredients combined to work properly, and you can’t just mix them back together after separation, since the refining process for motor oil is complex and industry intensive.

Most people think that evaporation is a process caused by heat and sunlight, but it’s actually exposure to air that leads to evaporation.

Now, motor oil is quite thick, which makes it pretty resistant to evaporation. However, it is not immune. If exposed to air, it will slowly but surely evaporate away, or at least certain ingredients will.

Of course, you have to open the bottle if you want to use the motor oil, so exposure to air is unavoidable. However, you can try to avoid exposure as much as possible by sealing the bottle well if there is any leftover in it.

Light is also detrimental to motor oil, as it can accelerate the oxidization process and reduce the lifespan of the motor oil. That’s because the oxygen molecules in motor oil react to the UV rays of natural light.

Try to keep them in the opaque containers they came in as well since that helps. If you do move motor oil to one of your own containers, try to make sure that one is opaque as well.

Ideally, though, it’s better to keep the motor oil in the container that it came in. Those containers are designed to facilitate a longer lifespan for motor oil in various ways.

There’s not much benefit to moving the oil over to other containers of less specific design.

Read also >> What Is a Top-Off Oil Change? (All You Need To Know)

Read also >> How Much Does Walmart Charge for an Oil Change?

Most bottles of motor oil have storage instructions written on them somewhere. These instructions provide you with guidelines on how to best store your motor oil to extend its life as much as you possibly can.

For the most part, they’ll tell you the same thing we have: avoid exposure to air and light as much as possible.

Still, there may be other elements of storage mentioned by these instructions that have not been mentioned here.

The point is, you should follow these instructions to the letter if you want to maximize the lifespan of your motor oil. After all, the people producing it know better than anyone else how it should be stored.

Of course, even if you follow those instructions, the motor oil is going to go bad eventually. It simply cannot last forever. Even if you never open it and store it ideally, most motor oil is only going to last around five years or so.

Furthermore, you need to keep in mind that some bottles of motor oil may have been sitting on the shelf of a store for several months before you actually purchased it.

That being the case, it’s hard to predict the exact lifetime of a bottle of motor oil.

Motor oil can go bad over time, whether it’s in a sealed or open bottle or sitting in the engine of your car.

Even if it never gets used, it will eventually become unusable. However, there are ways you can extend the lifespan of your motor oil.

Be sure to reduce its exposure to air, light, and heat as much as possible by storing it in proper containers and in proper locations.

If you do this, your motor oil should last as long as it can, around 1-2 years if the bottle has been opened.

link to How Long Does Oil Last In a Car Not Driven? (Here Is Why)

A lot of people incorrectly assume that if they are not driving their vehicle, they don't have to worry about changing their oil. They seem to believe that the oil in their vehicle is going to...

Continue Reading
link to Is Replacing Engine Oil The Same As An Oil Change?

You may have heard the terms 'replacing engine oil' and 'oil change'. You may be wondering whether they are the same thing. That's what we are going to discuss on this page. We are also going to...