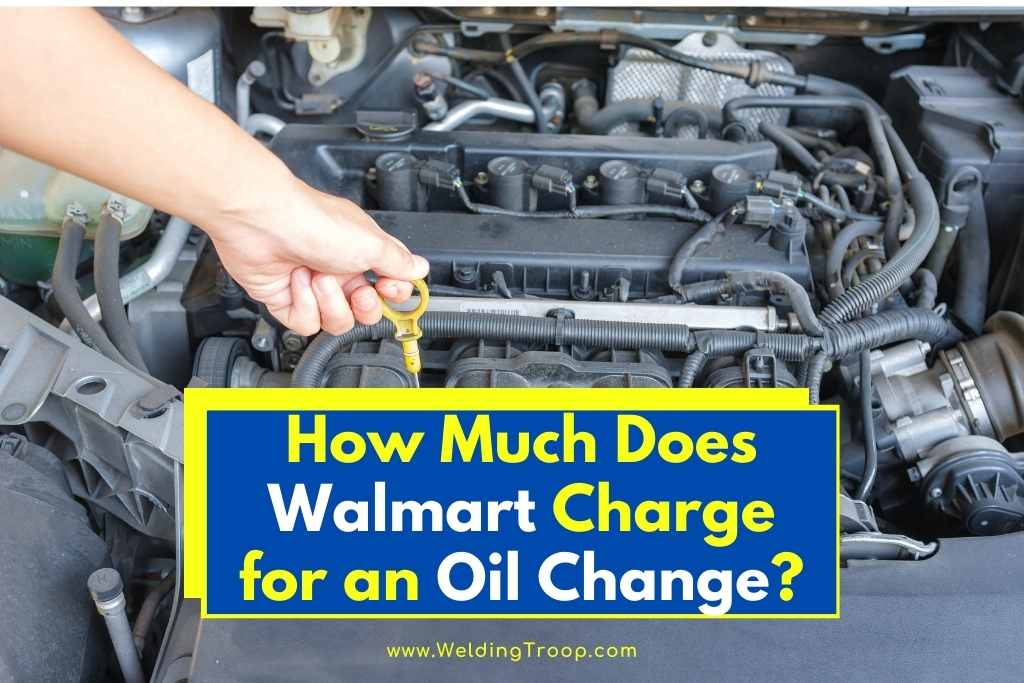 Walmart hit the jackpot when it decided to open up automotive specialty shops in the vast majority of their retail locations worldwide.

What could be more convenient than shopping while getting an oil change? Walmart is known for its low prices and that retail strategy holds true for oil changes as well.

There is more than one oil type and for standard oil changes, Walmart will usually stick with a generic conventional oil brand or a brand name, depending on what deal Walmart can make with the various brands out there.

Walmart has a pricing structure for the other oil change services that they offer as well.

All of the above oil change offerings, including the standard oil change, come with up to 5 quarts of oil, a new oil filter, chassis lubrication, and a windshield wash. They will also check all of your fluids as well as refill your windshield washer fluid.

As a part of the oil change package, Walmart includes checks for your tire pressure, wiper blades, your vehicle’s battery performance, and the air filter.

If your vehicle has over 75,000 miles on it, Walmart offers the high-mileage oil change for $42.88. High mileage oils feature additional additives that are focused on potential leaks.

When your vehicle is getting on up there in miles, it’s just a matter of time before minor leaks crop up.

Usually, the oil gaskets are where the slow leaks start and high-mileage oil changes head these instances off before they can become a more serious problem.

Semi-synthetic is a mixture of synthetic oil blends and conventional, high-mileage oil. This type of oil is designed to get the most out of your vehicle’s capabilities and performance on the highway.

Like high-mileage oil, semi-synthetic is a more protective oil, since it contains several additives that lubricate moving metal parts better and longer.

Most importantly, it resists heat better than conventional oil. It breaks down much slower.

You might not prefer Walmart’s higher-priced synthetic oil change, but it will actually save you a lot more money in the long term.

Full synthetic oil is far superior to conventional (mineral) oil. It lubricates the moving metal parts in your engine better and lasts longer.

The biggest difference between conventional and synthetic motor oil is synthetic oil resistance and longevity. Synthetic and synthetic blends are highly resistant to temperature extremes.

Those temperature extremes break conventional oils down, rendering them useless.

Synthetic oil won’t break down rapidly and resists both high and low temperatures. That’s why you see synthetic oils that are marketed at 7,500 to 15,000 miles between oil changes.

You save money, especially at Walmart, by going with synthetic because it means fewer oil changes.

The fact that Walmart’s synthetic oil change prices are almost half the price of other automotive oil change specialists, it’s kind of a no-brainer.

Read also >> How Much Does Valvoline Charge For An Oil Change?

Read also >> How Much Does Firestone Charge for an Oil Change?

Walmart doesn’t list what the upcharge is for each additional quart of conventional oil. However, Walmart is usually the cheaper alternative to other automotive oil change specialists.

You would have to change your own oil to get a cheaper price or use a discount.

The typical charge is for 5 quarts of oil but there are engines that require much more and some that require less. If your engine requires 3.5 quarts of oil, however, there is not going to be a change in the overall price of the oil change.

For a conventional oil change at Walmart, the price is going to be $32.88 whether you are getting 5 quarts of oil or 3.5 quarts of oil.

There’s a chance that you could talk the manager of the auto center down 5 bucks but it’s not Walmart’s policy.

Other oil types are simply not the same price. Synthetic oil is more expensive to produce than conventional oil, so it’s not a reflection of Walmart charging more than it should.

The only other thing that you have to worry about is filters.

If you’re rolling into Walmart in a 2012 GMC Acadia, you probably have nothing to worry about. However, showing up in a 1970 Volkswagen Rabbit MK1 might present a problem, as those oil filters aren’t just sitting around on Walmart shelves anymore.

Perhaps that’s a bit of a stretch but you get the point. Some oil filters go in and out of production and, while it’s rare, it’s still common enough that Walmart doesn’t have a matching oil filter for a consumer’s car—it merits mentioning.

There are no additional services such as fluid inspections, top-offs, vacuuming, windshield wiper fluid refills, etc. It’s the most barebones package that Walmart offers in terms of oil changes.

They won’t even look at your tires—just oil, filter, and go. If you’re strapped for cash, there is no better option on the ‘oil-change’ market. This is especially true because you’re getting Quaker State conventional oil.

Of course, it’s conventional, but it’s not just some generic, the brand pulled off a shelf that’s covered in spider webs and dust mites.

Still, even with the price hike, you can’t even buy your own oil and filter, take it home and change it yourself for cheaper.

If your vehicle needs synthetic oil, high-mileage oil, or semi-synthetic oil, you won’t be able to take advantage of the Pit Crew option.

Unlike the popular myth that changing from synthetic to conventional oil will hurt, it’s just that—a myth.

Read also >> How Much Should You Top Off Oil? (All You Need To Know)

Read also >> What Is a Top-Off Oil Change? (All You Need To Know)

How Do Walmart Oil Change Prices Compare to the Competition?

While oil changes are anywhere between $25 and $50 nationwide, the average is on the high side, at $46, at least it is according to Angie’s List.

If you include the Pit Crew price at $22.88, Walmart’s prices are exceptional, especially since you are getting a quality oil brand.

If you elect to go with the Pit Crew oil change, Walmart beats everyone’s prices handily, with the exception of Sears and Goodyear.

The Goodyear price is kind of surprising, especially considering the cost of their tires is usually pretty expensive.

Sears also has a very good price on their oil change services but it’s getting harder and harder to find a Sears no matter where you live.

Another thing that Walmart has going for it is location. There happens to be a Walmart every 5 blocks all across the country.

Of course, every 5 blocks is a bit of an exaggeration but Walmart shops are everywhere and there’s no denying that Walmart has discovered the secret to becoming everyone’s most convenient-to-reach retail giant.

Full synthetic oil is another large factor that gives Walmart a leg-up on the competition. Out of the various oil types, full synthetic is typically the most expensive.

Not everyone can afford to take out a second mortgage just to hit up Jiffy Lube, however, which is why they are becoming more and more scarce.

Walmart may not have the cheapest ‘conventional oil’ offering (not counting Pit Crew), but they do offer the best value on a fully synthetic oil change.

What Oil Does Walmart Use?

You’re probably thinking Quaker State and you would be correct, at least for the Pit Crew oil changes. However, Walmart also has its own in-house brand, which helps them keep the prices low across the board, especially when it comes to full synthetic oil changes.

Walmart’s in-house brand is called Supertech Oil. Every oil that goes into a motor has to meet or exceed API (American Petroleum Institute) standards, which are standards set by Federal regulations.

Since Supertech is a private label brand, it’s manufactured by another company that is wholly unassociated with Walmart. Once upon a time, Exxon was the brand behind the Supertech label but that has since changed.

For whatever reason, that is no longer the case and the new provider behind Supertech automotive oil is Warren Distribution, which also supplies Advanced Auto Parts and O’Reilly’s.

While you may not have heard of Warren Distribution, odds are good that you’ve heard of Walmart, O’Reilly’s, and Advanced Auto Parts.

If you were to get ahold of a quart of Supertech motor oil, flip it up to look at the bottom. You will probably see ‘WPP’ stamped on the bottom of the plastic container, which stands for Warren Performance Products.

How is Walmart’s Oil Rated?

If there is one thing that can be said about Supertech Oil, its that it is one of, if not the cheapest, oils available in the motor oil market today. It’s one thing to be cheap and it’s another thing entirely to be good.

For starters, if the oil was bad, it wouldn’t pass the API standards.

The consensus out there, along with actual testing, proves that Supertech is not only decent, but it also passes all of the metrics for full synthetic, synthetic blend, high mileage, and standard oil viscosity and resistances.

There’s no measurable difference between Super Tech’s capabilities and any other comparable oil, at least as far as testing in a laboratory is concerned.

What is the cheapest place to get an oil change?

When you calculate everything in, as far as price comparisons matched with oil quality, service, location, and oil change types, Walmart typically wins the ‘cheapest oil change’ battle.

The average wait time for a Walmart oil change, regardless of what oil type you are getting, is between 15 and 30 minutes.

Can you bring your own oil and oil filter to Walmart to change for you?

Yes. Walmart allows its customers to bring their own oil and oil filters and Walmart’s Auto Service Center will change your oil and filter for you at the Pit Crew price.

Is it cheaper to change your own oil over Walmart’s rates?

It can be but it depends on the type of oil you are changing and whether or not your oil filter is a premium oil filter. If you take advantage of oil and oil filter packages, it may be cheaper to change it at Walmart.

Walmart’s Pit Crew oil change is probably one of the best deals in the country and their other oil change prices are decent as well, especially when you get up to full synthetic oil changes. In terms of competition and Walmart’s Supertech brand, there’s no reason to think that you aren’t getting solid oil capability at a good value.

link to How Much Does Valvoline Charge For An Oil Change?

Do you know how much Valvoline charges for an oil change or how much an oil change costs at Valvoline? Well, you are at the perfect place to find the answer to such a question. Have you ever...

Continue Reading
link to How Much Does Firestone Charge for an Oil Change?

Do you know how much Firestone charges for an oil change or what is the oil change cost at Firestone? Well, you are at the perfect place to find the answer to such a question. Oil changes are...