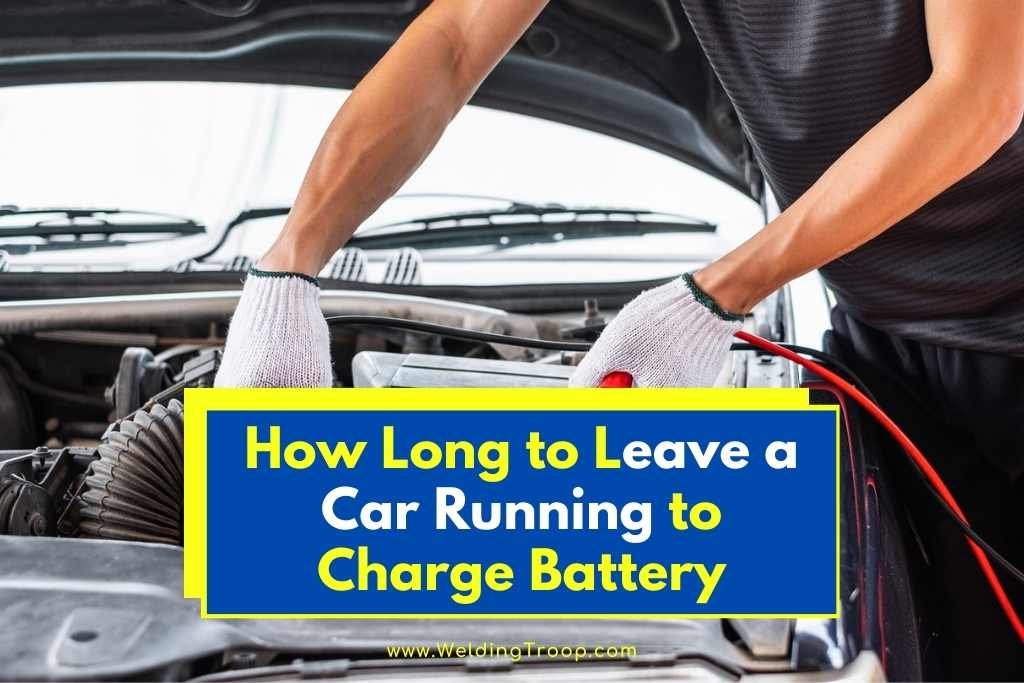 Do you know how long you need to run your car in order to charge your battery? this is one of the questions our readers ask a lot. Well, we´ve got you covered.

If you made the mistake of leaving your dome light on overnight and have to jump-start your battery the next morning, you might be curious as to how long it will take for your idling engine to completely recharge it.

The general consensus is that a full battery charge will require about thirty minutes of idling. That’s assuming your vehicle’s alternator and the wiring are all in tip-top shape. It also matters what your battery is running inside the car.

It’s important that you get inside of the car before you jumpstart it and turn everything off. Turn off your headlights, interior air, interior lights, and anything else that your battery powers.

The more your battery has to power, the longer it takes to charge it back up.

How Does the Battery Charge While Idling?

The alternator is the key to the entire electrical infrastructure inside your vehicle. It is solely responsible for charging the battery up. It works by converting mechanical energy into electrical energy.

It can only convert mechanical energy if there is something driving the mechanism to do so. That’s where the drive belt comes in. When you lift your hood up, it’s most likely the first belt you will see or the largest of a series of belts.

It creates voltage, as it spins inside the stator, by the use of copper wires because these wires, shaped in the form of a coil, generate voltage when they spin inside of an electromagnetic field.

The reason the rotor spins so fast is that it creates more voltage the faster the copper moves within the field. Since the alternator creates alternating current (AC) voltage, there needs to be a mechanism that can convert AC to DC to charge the battery. That’s where the rectifier comes in.

After the rectifier converts the AC current to DC current, it is then fed to the battery, charging it up. When your vehicle is sitting in the yard, idling, the alternator is working under the drive belt, charging the car battery.

Unless you have a bad battery, a functioning alternator should always be able to charge it up.

How Long Does it Take to Charge the Battery While Driving?

It takes roughly the same amount of time—30 minutes—assuming you are driving around in town, obeying the speed limits.

If you want it to charge faster, you need to get the vehicle somewhere with a higher speed limit.

Remember, the faster the rotor spins, the more voltage is created in the alternator. Getting your RPMs up on the highway moves the drive belt faster, which works the alternator faster, improving the charging speed of your battery.

How Long Will the Battery Last Without Starting the Vehicle?

If you have a brand new battery in the car and you let it sit there, without cranking the car up, it will last about two months. If it’s an older battery, you can effectively cut that time in half or even less.

Some people think that going outside and starting the car for a minute once a week helps. However, it actually does the opposite. There is more drain on the battery when you start it than it gains in only a minute’s worth of idling.

You’ll actually kill your battery faster if you do this. If you are trying to keep the battery in shape for a vehicle that no one is driving, you need to start it up once a week and let it idle for a good 30 minutes.

Better yet, take it on a little drive somewhere that will take a while. Or, get it out on the interstate and get the car up to 70mph for a much more rapid charging time.

What if You Can’t Start Your Car?

If this is the case, it’s a matter of figuring out why it won’t start. It may not be the battery after all. There are times when the alternator fails and people have enough juice in the battery to make it the rest of the way home, none the wiser that anything is wrong.

If you jumpstart your battery because it won’t start, the vehicle starts and fails a few minutes later because the battery died again, it’s almost certainly the alternator.

Auto retailers also sell car battery chargers that you can plug in and use to charge your battery.

If you charge the battery up and it still won’t turn over, you may be looking at your ignition system or starter as the culprit.

There are a lot of systems that go into the act of starting your car but the battery and the alternator are probably the easiest to diagnose when your car won’t start.

In most cases, if your battery is nearly dead, the car will at least try to turn over, followed by a series of ‘clicks.’

If you don’t hear the clicks and it doesn’t try to turn over at all, there is most likely a more significant problem going on, such as the starter, solenoid, or ignition system.

All you need to do is run your car (either idling or driving around town) for about 30 minutes to fully recharge your battery.

This is assuming that your alternator and the wiring are in very good shape. As long as the alternator is capable of doing its job, it will charge your battery.

If you really want to charge it faster, take the vehicle somewhere you can get above 55mph. The drive belt will work the alternator harder, producing more voltage and a faster charge time.

link to How Long To Charge a Dead Car Battery With Alternator?

Do you know how long does it take to charge a dead car battery with alternator? Well, you are at the perfect place to find the answer to such a question. The alternator is one of the most...

Continue Reading
link to Can You Leave a Battery Charger Connected? (Is It Safe?)

Do you know if you can leave the battery charger connected, it this safe? Well, you are at the perfect place to find the answer to such a question. Every so often, your car's battery will need to...