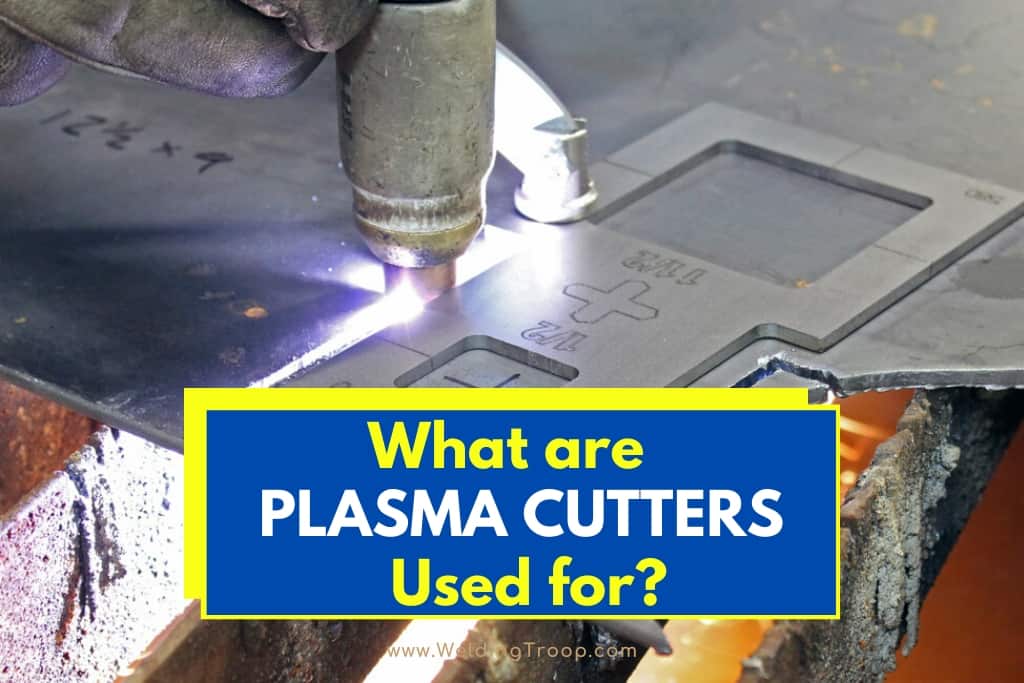 It is fair to say that there are few things more important for welders than making sure they have the right tools for the job.

Given the high-risk nature of welding, with so much heat and sparks involved, you need to make sure that you have the right tools on hand. That means investing in a plasma cutter.

What exactly are plasma cutters used for? Plasma cutters are used for various applications such as DIY jobs or for professional metalworking shops.

What makes plasma cutters the tool of choice over others? What can they do that other can’t? What can you use them for – and, given those different purposes, what should you look for when hunting for the perfect plasma cutter for your needs?

The great filmmaker, poet, and all-around artistic legend Jean Cocteau famously declared that filmmaking would not become a true art until “its materials are as inexpensive as pencil and paper.”

Granted, we haven’t quite reached that point yet with welding, nor is that likely to happen in the near future, but it’s certainly true that plasma cutters and thus hobbyist welding is more affordable than ever before, allowing for a boom in hobbyist plasma cutter artistry.

If you have ever been interested in making metal sculptures or doing some metalwork on your car or motorcycle, affordable plasma cutting can make that happen.

If this is the purpose for which you want to get into plasma cutting, affordability is indeed your friend.

A lot of the professional jobs described below require a tool that is of a much higher caliber and voltage.

When you are welding for your own purposes, however, you can be a lot looser with your materials and thus not have to worry as much about things such as getting a high-voltage welder.

On the contrary, most home sockets cannot support the kind of power required by these units.

As a result, if you are looking to create artwork with a plasma cutter, you’ll want to invest in an affordable and home-friendly model.

Your power sockets probably won’t be able to support voltages of more than 110-120 volts, so that’s the range in which you should be searching.

You also won’t have to worry about investing in expensive plasma cutting gases.

Compressed air should be enough to take care of the work you need to accomplish.

Let’s say that you aren’t a professional, per se, but you do fancy yourself a handyman (or woman) and want to do some metalworking work around the house.

Examples of household DIY plasma cutter work include the following:

✔️Repairing tools such as snow blowers and lawnmowers

✔️Welding metal hinges and other features into place on your home

There is a bit more variation with DIY jobs than with hobbyist projects when it comes to the appropriate tools and gases for the job.

Oxygen may be beneficial in some cases, although you’ll need to be careful when using it, as it can also cause some surfaces to oxidize.

In addition, you may require a slightly higher voltage or more heat for some of these tasks than with hobby work.

That’s because some of these tasks involve cutting into thicker pieces of metal than is often required for hobbyist projects.

As a result, gases such as oxygen and higher voltages and temperatures may be required.

That said, when cutting into thick materials, you’ll want to be aware of any dross that may be leftover and clean it up immediately, lest it set and harden.

Let’s imagine that you are a welding professional, and a plasma cutter is an essential part of your job.

If so, what kind of cutter do you need? The answer is, unsurprisingly, likely to be one which is more powerful than the ones already mentioned.

To cut into the several inches of tough stainless steel or aluminum which is often involved in these tasks, you’ll need a plasma cutter which is up to the task. Literally and figuratively, that hobbyist-level 110V machine “isn’t going to cut it.”

Instead, you’ll want to look for a more high-powered option, which can reach all the way to at least the mid-200s in voltage.

If you are using this unit in a home, you’ll again want to be aware that most home sockets are not designed to be compatible with voltages of that level.

You don’t want to blow out the socket or underpower your unit, so you’ll need to find an adaptor or generator which can safely give you the amount of voltage necessary for this unit.

Something else you’ll want to be aware of is the surrounding area, particularly as to its cleanliness. When welding professionally, it is vital that you work in clean surroundings.

Before you continue reading, here is an article we wrote about the danger of plasma cutting: What to Know, What to Avoid, and What to Do.

You don’t want shavings or debris getting into the molten metal. This can degrade the quality of your cut, or mix into the metal and harden underneath the molten surface, creating bumps and rough patches.

This can also occur if you press the nozzle directly to the metal surface itself.

That is one reason why many professionals make use of pilot arcs.

These allow professional welders using plasma cutters to cut into a surface without having to touch the tip of their nozzle directly to it.

The result is a cleaner cut that does not risk contaminating the nozzle or leaving debris on the surface.

Some leading professional plasma cutter jobs include the following:

These jobs take on many permutations in the auto, construction, repair, and other similar industries.

If you are interested in using truly top of the line materials, you may want to consider using a computer numerical control plasma cutter.

CNC options can be preprogrammed to cut along a certain area, allowing you to perform intricate cuts without having to do it by hand.

Needless to say, this method is quite complex, and the machines involved are reserved for the highest levels of the professional ranks.

Nevertheless, they can be a great way to pull off some incredibly intricate cuts or to cut through metal faster and more accurately than you might be able to do by hand.

Let’s focus on some of the most common plasma cutter jobs in greater detail, starting with construction.

Whether you are building something as big as a home or as small as a chain-link fence, chances are you are going to need to perform some metal welding at some point.

When that time arrives, you’ll want to make sure that you are working with the right kind of construction-friendly plasma cutter.

This means using one which is compatible with not just higher voltages, but which can likewise cut into thick metal surfaces.

Think of all the thick metal beams and supports which make up the frame of a single home.

Now think of all the accouterments within the interior frame of that home which also feature metal.

In all of these cases, you are going to need plasma cutters and gases which are up to the task of handling thick metal. This means working with nitrogen or hydrogen argon.

You will also want to spare a thought as to the portability of your unit. Think about it – when you travel from site to site, do you really want to haul around a heavy, cumbersome plasma cutter? Probably not.

That said, as stated above, you’re going to need one which has enough voltage to give you the power you need for such heavy-duty jobs.

You’ll thus need to pull off a balancing act and look for portable plasma cutters which can be carried around with ease while still packing enough of a punch to get the job done.

On the other hand, if you are using your plasma cutter for auto repair or salvage purposes, chances are you are working in a much more stationary setting.

As such, you can afford to sacrifice some portability in favor of extra power.

That said, you may be forced to work in tight spaces with these jobs, such as car interiors or the inside of metal frames from structures you are assembling or disassembling for salvage.

Either way, you are going to want to make sure you are working with plasma cutters which allow for free range of movement.

Ultimately, the question isn’t as much what plasma cutters can do but rather what you need them to do for you.

As demonstrated here, plasma cutters can fill a wide range of different niches. Each one has its own requirements in terms of the type, size, and power level of the plasma cutter, as well as the best gases used for different types of metal.

No matter your welding needs, you are sure to be able to find a plasma cutter that makes the cut.

What Is a Plasma Cutter and How Does It Work?

How Hot Does a Plasma Cutter Actually Get? Real Facts -2020

link to How Much Does Meineke Charge For An Oil Change?

If you’re realizing that it’s been a while since you last had the oil changed in your car, then you will want to shop around and find the best deal to get the job done. With that in mind, how...

Continue Reading
link to How Much Does Pepboys Charge For An Oil Change?

Changing the oil in your car is a necessity that is all too easy to forget about, and you definitely want to be getting the best deal available when you do get around to doing it. With that in...