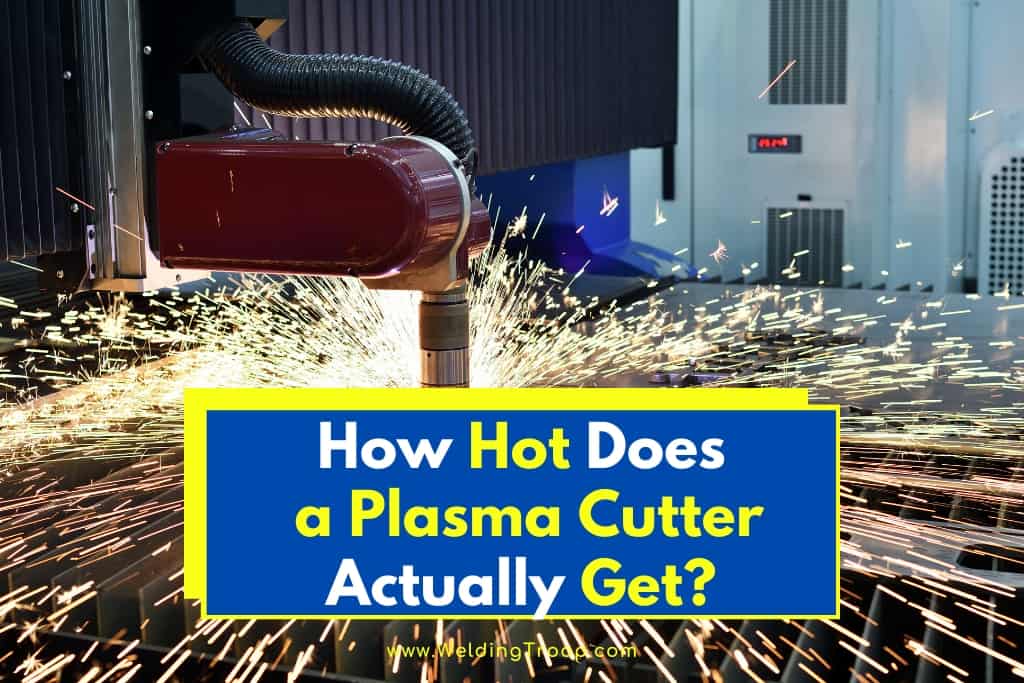 It is fair to say that working in welding means working with some pretty hot temperatures. You know that. Everyone knows that. What everyone might not know is just how hot things can get while you’re working with a plasma cutter on a fresh aluminum beam or cutting into some stainless steel.

So just how hot can plasma cutters get? based on some measurements, they can get as hot as 45,000 degrees Fahrenheit, or 25,000 degrees Celsius.

Intellectually, you know that the temperature required to cut into such tremendously strong materials has to be high. Even so, it can come as something of a shock to realize that those temperatures can top four, even five digits Fahrenheit.

How and why does plasma get so hot, how does the heat of a plasma cutter compare with some truly astronomical temperatures, and what can you do to make sure you can stand the heat safely?

Plasma is the fourth state of matter, created when gas is superheated and controlled in such a way as to strip atoms of their electrons.

Plasma cutters accomplish this by pushing gas through a narrow nozzle so fast that the resulting friction combined with the electrodes, voltage, and other heating components make the gas so hot as to transform it into plasma.

Just How Hot Is Plasma?

So given that, it’s worth wondering, just how hot can a plasma cutter get?

By some measurements, they can get as hot as 45,000 degrees Fahrenheit, or 25,000 degrees Celsius. That kind of heat is so immense that it’s obviously far too hot for you to expose yourself to – which is what makes it all the more mind-blowing that it’s possible to have that much heat at the touch of your fingers.

To draw a further comparison, consider an oxyacetylene flame. These are the types of flames produced by welders which rely on oxy-fuel. By contrast, these are “only” 9,000 degrees Fahrenheit, or 5,000 degrees Celsius.

We’re not done with the hotter-than-hot comparisons. Both can give off incredibly bright light, but can plasma cutters rival the heat of the sun itself?

Yes – maybe. It depends on how you frame the question.

Even if we take the larger figure, however, even being comparable to the hottest temperature of the sun gives an idea as to just how hot plasma cutters are, and thus how much power and energy is unleashed every time you turn one on.

Think something like the Earth’s planetary core must be hotter still? Think again. Not only are plasma cutters hotter than the Earth’s core, it isn’t even close.

At its hottest, our planet’s core measures around 10,800 degrees Fahrenheit, or roughly 6000 degrees Celsius – incredibly hot in its own right, but nowhere near as hot as the maximum heat generated by the sun or a plasma cutter.

That isn’t all – scientists think that they may be able to someday get plasma heated up to temperatures as high as 10 trillion degrees Fahrenheit. Needless to say, you won’t be using temperatures that high to trace out ornamental napkin holders or stick fenders back on your car, but it is still pretty incredible to wrap your head around.

In short, when working with a plasma cutter, you’re literally harnessing the power of something capable of reaching temperatures higher than anything on Earth and comparable to the hottest point of the sun’s surface. If that makes you appreciate the tremendous amount of heat on display here, you need a cold shower to wake up!

How You Can (and Should) Stand the Heat

Needless to say, those temperatures are a bit too hot to deal with unprotected. Harnessing that much heat can feel like a superpower, and in Uncle Ben’s immortal words, “With Great Power Comes Great Responsibility.” As such, you’ll want to take some basic precautions when using plasma cutters.

For starters, you’ll want to make sure that you account for all that power in your electricity bill. Generating all that power isn’t easy, and it isn’t always inexpensive. While you can get a hobbyist plasma cutter for a few hundred dollars, these typically don’t reach the literally-astronomical temperatures produced by the hottest plasma cutters mentioned here. When using such units, make sure you can actually foot the bill.

You should also make sure to practice proper plasma cutter safety at all times. This includes:

Properly harnessed, the immense heat generated by plasma cutters can feel truly out of this world.

Waterjet Cutter vs. Plasma Cutter | Differences & Their Use

What Is the Difference Between a Laser Cutter and a Plasma Cutter?

Here are some of my favorite tools & equipment´s

Thank you for reading this article. I hope it helps you find the most recent and accurate information for your welding project. Here are some tools that I use daily and hope you´ll also find helpful.

There are affiliate links, so if you do decide to use any of them, I´ll earn a small commission. But in all honesty, these are the exact tools that I use and recommend to everyone, even my own family. (NO CRAP)

To see all my of most up-to-date recommendations, check out this resource that I made for you!

+ Save Thousands of Dollars