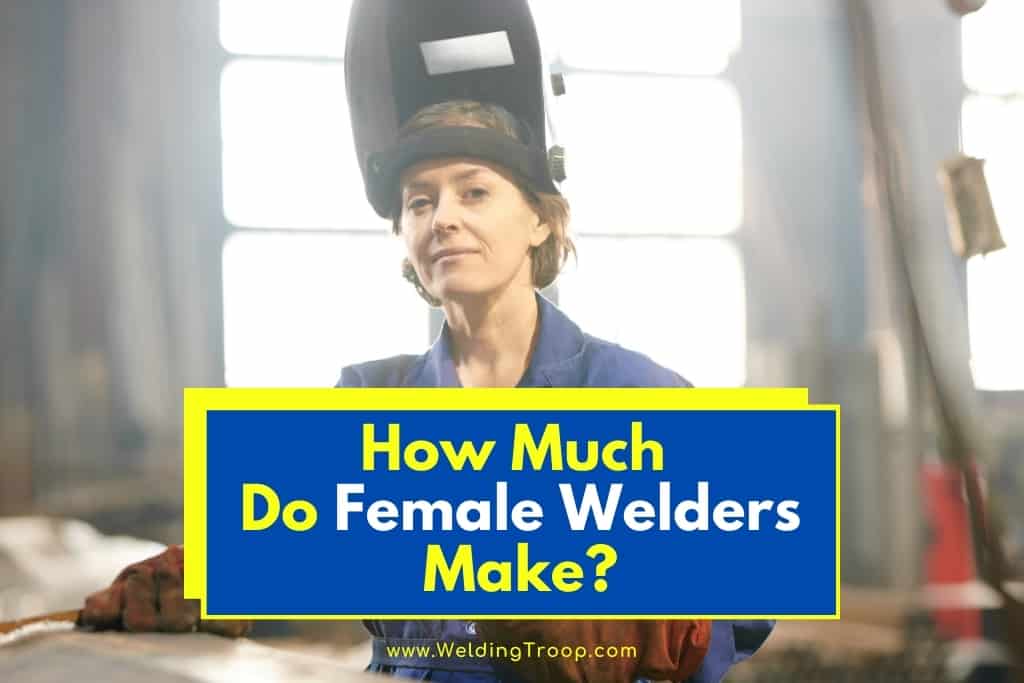 There are several factors that can affect the average female welder’s salary. These include the location of the job, how challenging it is, the level of experience required to finish it properly, and the certification that would originally qualify you to land it in the first place.

How much do female welders make or what is the average female welder’s salary? Female welders usually make around $40,000 a year. However, annual pay can increase to $80,000 or even $100,000 in some cases.

Men have long dominated the welding industry, but women have taken part in this industry ever since World War II. During and after the war, gender norms have changed, and women proved that they could do any job successfully, just like their male counterparts. Nevertheless, welding still remains to be a non-traditional career option for women, even today.

In 2018, females represented about 5.5% of all professional welders in the USA, but studies show that this will probably change in the future. Welding is a crucial part of several industries that continue to contribute to the growth of the American economy. This creates a continuous demand for educated, trained, and experienced welders who can take part in several projects.

It’s expected that in the future, there will be a considerable shortage in the supply of professional welders who possess the required skills and knowledge that enable them to tackle any job successfully. This is mainly because most professional welders are old, and young people don’t consider welding when they’re thinking about future career options.

Females can be expected to fill in this shortage as they try to consider more successful career options. They have successfully proven that they can comply with the job requirements and can take part in several welding-based projects.

I recently wrote an article about 6+ famous female welders, have a look at it.

In the past, women might have been put off by the idea of welding because the general notion was that it was a physically demanding career where the work environment was considered unsuitable for women. Today the working conditions are different, as the working environment is clean and safe for both men and women.

Moreover, proper 3-D modular welding equipment and high-tech training techniques make the job easier to master, so women can practice welding without the risk of serious injuries. It’s all about having the required skills and knowledge for the job.

Women are fast learners and can quickly learn about the requirements of the job. Moreover, young women are known to be committed and won’t give up easily, which makes them perfect candidates for a demanding career option like welding.

There’s no gender-based pay gap between males and females in the field of welding. This is another reason why young women might consider welding as a future career option since they might be faced with this injustice while doing other jobs.

Related reading: How Long does It Take to Learn Welding?

Moreover, lots of women are ready to take the challenge to prove that they can excel in whatever they do. As a result, they will give all that it takes to make sure that they’re considered successful welders.

More young women are currently considering getting professional welding certificates. This will allow them to pursue a successful career in welding, inside or outside the USA.

Is Welding a Good Career for a Woman?

Welding is a predominantly male profession. The US Department of Labor reveals that women only make up 5.2% of the welding workforce.

During the Second World War, female welders weren’t a rarity, not by a long shot. As men took up arms in the war, women found themselves filling an employment shortage: they made up about 25% of the welding workforce.

Time may have progressed since then, but the number of female welders has dwindled. This is due to multiple reasons, one of them being the unpopularity of welding as an occupation. But right now demand is increasing, with welders growing older and older, and no young hands to fill in the gap.

It’s the perfect time to consider a welding career as a woman. It may seem like a man’s job, but more and more women have been taking an interest in it. It has good pay, great benefits, and excellent flexibility.

Unions have also been focusing on women. For example, the Ironworkers union now offers a six-month maternity leave.

Welding could also pave the way for women to establish scientific careers. Welders with knowledge of engineering, robotics, and computer programming are in high demand. Such welders also receive even better pay.

Not Only Work, but Also Art

It’s hard to imagine welding being used as an avenue for art. Welding certainly doesn’t bring the joy of beautiful paintings or graceful sculptures. But Alexandra Ivelva, a young female Russian welder, managed to mix its brutality with creative brilliance.

Ms. Ivelva is responsible for a dazzlingly beautiful array of welding sculptures. Her work has been featured at several art exhibitions and public parks. She has even ventured into purse-making.

I recently wrote an article about “What 3 Important Skills are Listed Under Welder – All You Need to Know”, have a look at it.

Ivelva isn’t the only talented female welder out there. In 2018, Diana Bagautdinova certainly felt the weight of being the odd one out: She was the only female Russian representative on her team.

She had been studying to become a heating systems engineer when welding attracted her. Ms. Bagautdinova described her interest saying, “I’m so incredibly fascinated by the welding process itself. It’s such a buzz to look at a burning spark as it binds metal. It’s really beautiful.”

Impressed by her work in class, one of Ms. Bagautdinova’s supervisors told her about the WorldSkills championship. It’s an international competition where young specialists display their skills and knowledge in their respective fields.

Since then, Bagautdinova has been combining her studies with something else: teaching welding classes for boys.

I created this resource page to easily list recommended tools, and equipment that I use and/or those I know are valuable. This way you can quickly find great products all in one...

Continue Reading
link to How To Setup and Build a Trailer Frame: 11 Easy Steps

Have you ever wondered how to setup and build a trailer frame? Look no more. We´ve got you covered. Trailers can be expensive. Therefore, it isn't really a surprise that there are so many people...

Together we have more than 34 years of experience in the industry.
We strive to inspire and inform mechanics, car users, and new welders through skill-based tutorials, comprehensive training guides, and in-depth gear reviews.
.....for more please view "the team".

We are a participant in the Amazon Services LLC Associates Program, an affiliate advertising program designed to provide a means for sites to earn advertising fees by advertising and linking to Amazon.com. WeldingTroop.com also participates in affiliate programs with CJ and other sites. We are compensated for referring traffic and business to these companies.