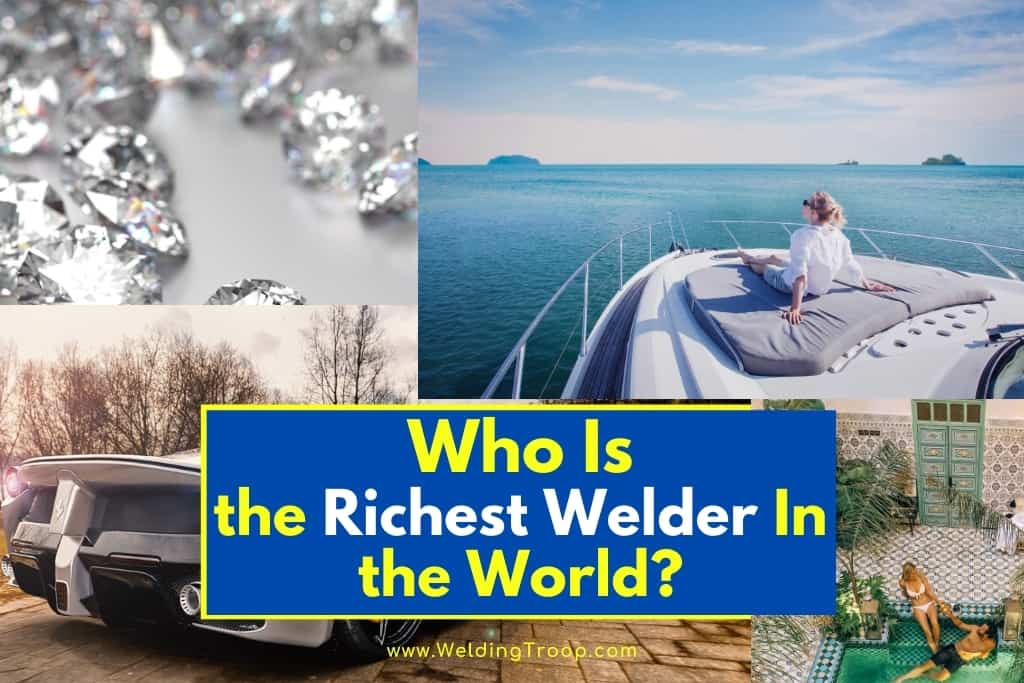 Welding isn’t an easy job. Manual jobs like these are quite demanding. You need a specific skill set to get into the game. If you do it right, it can be highly rewarding. Nevertheless, there’s a question that remains: how rewarding is welding? People casually throw numbers around everywhere, from a modest $50,000 to an exciting $300,000. So, what’s actually true?

Who is the richest welder in the world? As of now, Justin Friend is believed to be the welder earning the highest salary in the world. In 2013 he was 22 years old and his income rose to 140,000 dollars.

Our search for the richest welder in the world brought us to some interesting places. Today, we’ll answer most, if not all, of your questions regarding this matter.

Who Are the Richest Welders in the World?

In 2010, Friend’s parents expected him to attend college after finishing high school. After all, as researchers and academics, that’s the path they chose. So when Friend decided to attend Texas State Technical College in Waco, it was a surprise for everyone.

As part of his welding course, Friend then went to school for two years. His first year as an official welder was 2013. By the end of it, his income had risen to $140,000. He was only 22-years-old.

His mother, who’s a retired biology researcher, thinks it’s the right decision. “Not everybody needs a four-year college degree,” she reaffirmed.

Her words are emphasized by the fact that her son is dyslexic. Reading and spelling might not have been Friend’s strongpoints, but mechanical and spatial ability certainly is.

Moreover, Friend works 72 hours a week. After he completes 40 of the 72 hours, he receives overtime. On top of that, his earnings are tripled on holidays. He’s also granted health insurance, paid vacation, and a 401k retirement plan.

>> Read More: How To Start and Grow a Welding Business In 11 Steps

The Rich Welder: Myth or Reality?

In 2015, the American Welding Society revealed that the national average pay for welders was $17.81 per hour. The only states to beat that number are Alaska and Hawaii. However, the pay doesn’t sound as impressive when you learn about the cost of living there.

Anecdotes about well-paid welders are nice to hear. But just because Steve Jobs was a college dropout doesn’t mean you should leave college. Similarly, going to trade school doesn’t automatically grant you a $140,000, a nice retirement plan, and health insurance.

Learning about welding doesn’t necessarily have to be hard. There are even high school classes for it. But to do it well, and get paid well, you still have to go to college, just like Friend did.

Moreover, you have to attend various courses and earn certain certifications to boost your career. An associate degree in welding can also be a big advantage.

Where Are the Richest Welders In the World?

We can’t deny it. This is a broad search. It’s why we decided to geographically narrow it down by focusing on the entirety of the USA and its 50 states. So where can we find the richest welder there?

The United States Bureau of Labor Statistics reveals some interesting answers. Here are the top five highest-paying states for welders:

If you’re impressed by any of the salaries mentioned, then you should hold your horses. Metropolitan areas offer some of the highest salaries for welders, especially for gifted and experienced ones. Wheeling, Ohio is an example of this: the annual mean wage it offers for welders is a whopping $85,310.

Here are some of the highest-paying metropolitan areas for welders:

Welders Salaries vs. Cost of Living

Of course, numbers alone aren’t an indication of a satisfying salary. High numbers are nice, but they aren’t that impressive when stacked against high costs of living. So what do these states’ cost-of-living say about welders’ salaries?

In Anchorage, Alaska, a one-bedroom apartment averages $1,216 per month. Furthermore, food and utilities cost more in Alaska than they do in other states. So while welders in Alaska get paid more, their money has less purchasing power.

Opting for a welding career doesn’t mean you’ll wake up rich. It needs hard work, skill, talent, and determination. So while you won’t be able to make $300,000 a year at the start of your career, you could still work towards earning a satisfactory sum or start your own business. For more info, read this article.

$50+/hr Beginner Welding Products you can SELL to get your business going >> Check out the video below:

For more helpful articles about welding please check out our articles below:

>> African American Welders – All You Need to Know

>> The 5 Types of Welding Joints and Their Use – Complete Guide